THINGS I'LL MISS ABOUT THE OLD DCU DAY 2: The Outsiders 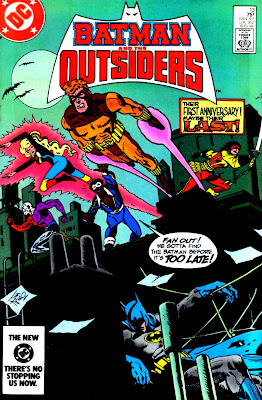 The DC answer to diverse Marvel line-up's like the current Alpha Flight crew won't be found in Justice League, but rather The Outsiders. Sadly, after so many years of waiting for the classic Jim Aparo / Mike W Barr gang to re-assemble, we get to watch the title tank again - and personally I blame Batman.

To a young 80's Dan, Batman and The Outsiders #13 was one issue that blew my mind on multiple levels. First this bunch of mismatched misfits sneek a gasp under the cowl while a drugged out Bats is doo-lally, then they tie his resulting hallucinations into an awesome retelling of one of the most retold origins on Earth.
When Brucie boy snaps to, he judges them worthy enough to share the ultimate super-hero sign of trust - his secret identity - and they all play dumb, even though they just found out illegally a few moments prior. I mean if Batman gave the team the thumbs-up way back them, how could DC do any less now? 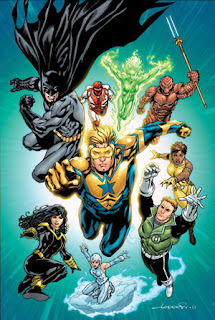 Perhaps they felt between Frankenstein and Stormwatch they have 'kooky' and 'clan-destine' covered. After all, Batman will still be globe-trotting outside the JLA on the UN sanctioned Justice League International (And I thought he'd plant a mole on such a political team, rather then get involved himself)!
Will DC play down the paranoia of their biggest lunchbox seller? Or is there hope a few story-arcs in Batman will state 'They've had their chance' to a room of shadowy figures, revealing themselves as a fluresent teenager, a samurai, a prince, an element man and an electric man with a 'fro?
Yes - the 'fro. Because you know if Black Lightning is coming back, he's got to go back to the afro jumpsuit look. Somethings never lose their cool - the original Outsiders included.
Posted by IADW at 11:58 pm