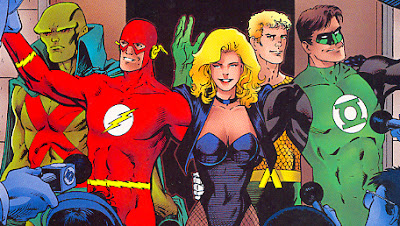 Okay, I know this one has been retconned for a while now as DC pushes forward that the trinity or big seven formed the JLA, however I've always believed you can have your blondes and your amazons too. Plus who doesn't want to see more of Jim Lee's Canary?

The best proof of what a difference her involvement makes is Mark Waid and Barry Kitson's JLA: Year One maxi-series, which I firmly submit as must have reading for any fan of the medium, DC fan or not.

Here Canary not only serves as a bridge between her Mum's turn in the mantle as part of the Justice Society and the League - name-dropping to her teammates at any given opportunity - her personal story of mild-mannered brunette florist by day-job / motorcycle riding, blonde super-hero by passion grounds both the team and the development of the headstrong butt-kicker she will go on to become.

While she will always be the most natural fit for League Chair in my eyes, it's not a case of Diana or Dinah, as some seem to boil it down to. Writer Gail Simone's run on Wonder Woman proved how well the two compliment each other - they are the female 'World's Finest'!

Canary won't exactly go unheard of in the DCnU 52, headlining the new Birds of Prey series alongside Poison Ivy. Still, I'm sure if Batman can serve on multiple teams at once so could comics best fishnet clad fighter (Sorry Zatanna).
Posted by IADW at 9:00 pm