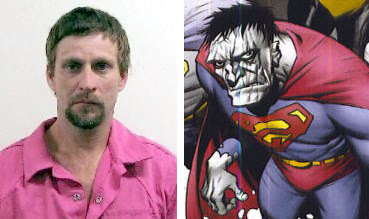 Lets hear it for the boys in blue. Granite City Police have arrested this "man", suspected of manipulating the Superman collection of mentally disabled man Mike Meyers out of the house, while an unknown woman sat with Mike watching Superman movies on his couch.
The nogoodnik Bizarro-brained, alleged thief is 37-year-old Gerry A. Armbruster, who is also facing charges for the forcible robbery of a 76-year-old man. So yip, a natural winner all around.
While Mike has now had his original collection returned to him, he plans to donate the replacement collection supplied to him by fans from all over the globe to charity, most likely a childrens hospital. As for Armbruster, his parole is set at a minty $100,000 bond. That's the cost of release, however no word yet on the cost of keeping him in there.
Posted by IADW at 8:39 am