LEST WE FORGET: Raising Ghost

Despite having a first class ticket to ride, some great comic concepts often miss the train and end up in four colour limbo, all but forgotten. In Lest We Forget, I pluck one of those limbo-lingerers and pimp their need for a comeback. This time around it's the deceased girl Adam Hughes brought to life for Dark Horse, the aptly named Ghost. 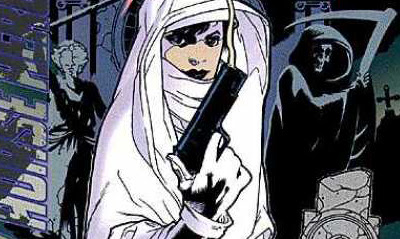 Back in the 90's, we had monthly Adam Hughes art. Yip, that's right; monthly - Adam - Hughes - art. However not knowing how good we had it, most of us let Ghost from Dark Horse Comics rest in peace. Now, it's time to reload the chamber and bring back the spectre with the amazing pair of colt 45's.

WHY SHE IS COOL: A Lively Spirit
In Arcadia City, politicians and big business breed in corruption, using super-heroes as pawns. Yet one woman who lived as a victim, lives on, reborn and locked and loaded to save the soul of her city - starting with the man who ordered her death.

Where most heroes renounce their initial revenge after seeing the light of their ways or being told off by Spider-Man, Elisa Cameron had no such intention. Writer Eric Luke had her crave her second chance to level the playing field, by addressing issues like the power play between male and females - issues that quickly separated Ghost from the glut of 'Bad Girl' books in the 90's comics market. 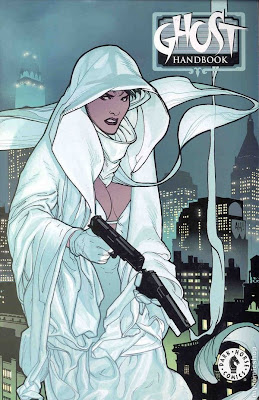 Fighting her own memory loss, reluctance to let anyone in close and more, the veiled gun-slinging spirit clawed her way towards the status of 'hero' and being close enough to risk someone emotionally disarming her.

While Adam Hughes' stint on cover duty and interiors would only last initially for the first story arc, he has become soul-mates with the character - even though some youngster named Ivan Reis took over for the replacement rotating art team, starting at issue #17!

HOW I’D RETURN GHOST TO THE LAND OF THE LIVING:
Ask DC, it's never to late to re-start a shared universe. Plus how cool would it be to merge original creations like the pulp-tastic Ghost, with established properties like Turok Dinosaur Hunter or even the capital of noir, Sin City? Everything is better with Dinosaurs!

Sure, such an event would mean moving heaven and hell, but when you are talking a character as rich and as deep as iconic avenger The Shadow, Ghost would make The Horse THE place for classy talent, on even classier independent properties.
Posted by IADW at 9:28 am