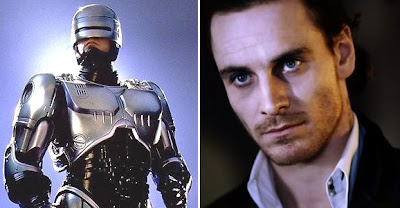 Part of the reason no major X-villian has been revealed in the last few years, is because when your average Joe McNasty decides to take over the world, they look for heroes whose rouges galleries lack a little something. One where they can be 'Top Dog', say the coolest lines and blow up the coolest things, and with the X-Men that gig is, well, taken by Magneto so they move on.

Now word comes Brazilian writer/director José Padilha, has his eyes on the man that nailed said Magneto in X-Men First Class, Michael Fassbender, to play the top dog of sci-fi heroes, say the coolest lines and blow up the coolest things - Robocop. See how that works out? It's like meets like, and me likes A LOT.

While Fassbender is still to meet the director for initial talks, there's only proof in one pudding. Look at the pic of Michael, then picture him saying "Halt. Put down your weapons or there will BE trouble" and forget it - case closed.
Posted by IADW at 5:21 pm