I always feel like a good Swamp Thing tale needs to be read like it's soaked in bourbon, while your music platform of choice pumps out a little CCR or Lynyrd Skynyrd in the background. Now back in the DCU proper, the Bible Belt based horror franchise that is Swamp Thing has a whole new series - and while this it's starting shot has more than a bad moon rising, it is easily the fortunate son of DC's new 52 thus far. 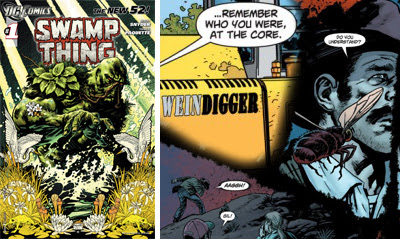 First of all it's freakin' sweet to have Swamp Thing back in a regular DCU book, with the classic logo blaring out at you from the masthead. Sure the character was a Vertigo natural, but as this issue proves you can still have a damn good horror comic and fly under the AO flag.

Yanick Paquette's pencils and page layouts play a huge part in conveying this tone. Bright when needed, dark in all the right places, and capturing all the emotion and plot easter eggs in a way that makes even the 'barren panels' look dynamic. Case in point did you notice the digger was branded 'Wein' after Swampy's iconic co-creator Len Wein? 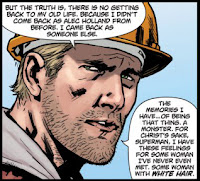 The real words that cultivate this wee beastie however aren't emblazoned on the side of heavy machinery, they fall to writer Scott Snyder. Sure he has Superman drop in to see if Holland has any connection to the plague of species' currently running rife in the animal kingdom and pulls off a scene which ensures you'll block your ears whenever you see a fly from this point forward, but that all pales to the anti-inflamatory properties of the household cabbage.

From the get-go, Scott uses the beleaguered botantist's memories to re-enforce Alec is just as much of an elemental at heart as his alter-ego. Dr Alec Holland, the man who remembers everything, now finding solace in the timber building industry, advising on ligament pain, wood rot and how vicious the plant kingdom really is. These Swamp Thing 'Flash Facts' not only convey a tonne about the character, it's clever as hell and gives your brain a bit more to chew on at the same time.

Meanwhile, as hell breaks a path (and more then a few necks) right to Holland's door, his own haunted nightmares and their connection to nature's disease can only be solved by seeking out the monster he released. Luckily for Alec, that "monster" is one step ahead. 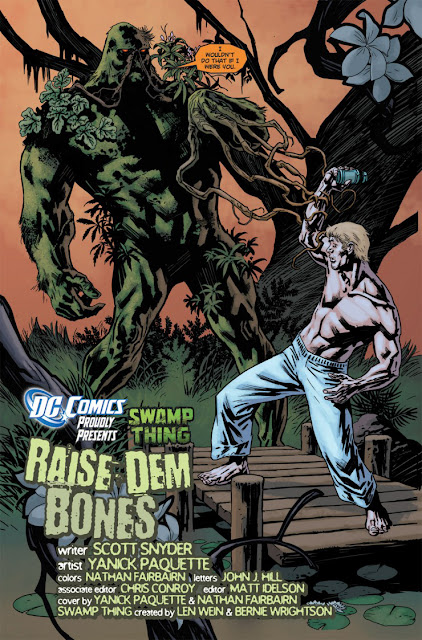