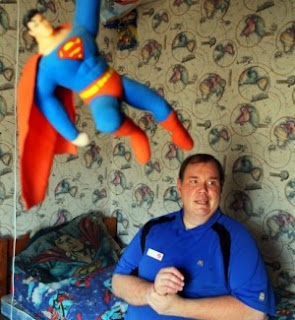 When a former co-worker named “Gary” recently made off with Mike Meyer’s entire Superman collection valued at over $5,000, the restaurant worker who suffers from a mental disability thought the odds of seeing his life’s work again was a miracle only his childhood hero could pull of. Turns out restoring Mike’s faith in the human race isn’t a job for Superman – but a league of them.

As this vid illustrates, looking to fill as many of the gaps as possible in Mike’s now absent collection, The Superfriends of Metropolis are using their Superman fan club connections to spearhead the now global aid efforts, coordinated by Keith Howard.

No easy feat, when stolen items include almost 100 figurines, an old time radio, a monopoly game, TV set and over 1,800 comic books, some dating back to the 1950’s! Mike has been left with few super-items, luckily his dogs Krypto and Dyno, and a hand-sewn Superman costume hanging on his back door.

Original artwork from as far away from Paraguay is on it’s way, celebrities are supplying autographs, and a comic shop owner in the hometown of Superman creators Jerry Siegel and Joe Shuster - is arranging a memorial brick from one of the creators' houses with a plaque for Meyer. They have also offered to fly the Granite City man and a friend out for a tour of their city’s Superman museums and tourist sites. That’s not even including the actual comic book donations themselves or the other legion of good samaritan super-fans joining the relief effort on facebook daily!

That is what makes this story one of the best of the year. Sure “Gary” is getting off lightly when Mike describes him as a "no-good excuse for a human being", but the way fandom aren’t letting it tarnish his love of the character is just mind-blowing. The fact the gifts assembled will be delivered to the 48 year old fan by Howard dressed as the Reeves-era Superman, along with his daughter in her Supergirl outfit, and other fans is just icing on the cake.

Asked ‘Why Superman?’ Meyer responded; "He uses his powers not to benefit himself, but to help others. He's the champion of the oppressed." Mate, I couldn’t agree with you more.
Posted by IADW at 12:18 pm