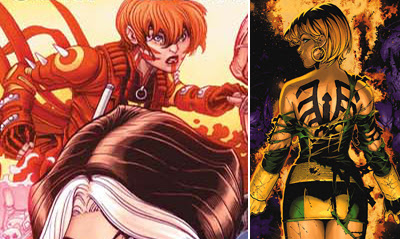 For a loner, Wolverine is a man with a hell of a lot of friends. Now his post Schism, Regenesis bunch of drinking buddies has been revealed, the family photo looks a little something like this;

The main additions since we peeked at the half-way stage include; Fantomex joining a double-duty pulling Psylocke on Uncanny X-Force and former Excalibur mainstay Phoenix/Rachel Summers joining Rouge and Gambit on the aptly named X-Men Legacy. Seeing how a returned to earth Rachel deals with Hope in the months ahead will definitely be something to watch.
Posted by IADW at 7:25 am