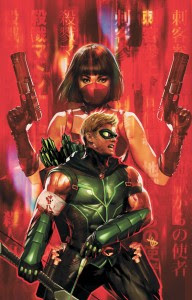 For the second day in a row the comic news headlines have gotten me in to an excitement overdrive. This time around, Ann  Nocenti, the writer whose one issue story 'Golden Rut' in the pages of Daredevil started my obsession with the character has landed the scripting gig to Green Arrow starting with issue #7.

Picking up from a three issue hit by writers Keith Giffen and Dan Jurgens, Nocenti is the perfect choice for Oliver Queen and will hopefully lead to a return of the character being a man of the people over the wealthy superhero playboy the DC 52 reboot currently has him appearing as.

Plus there is the ability to get some really twisted villains sorted. Ann Nocenti's work on rouges such as Typhoid Mary means she has a knack for the creation of great villains that can constantly pose problems of morals, ethics and action for any hero - and Queen definitely needs a few more of those!
Posted by IADW at 2:57 pm