IDW are giving fans one hell of a New Year! They've got not one but two Transformers monthly series' launching, a G.I. Joe crossover, and the sequel to Infestation which will extend it's reach to the universes of the properties mentioned above, plus those of 30 Days of Night and J.Scott Campbell's Danger Girl! When the excitement boils down to covers though, these four take the lead. 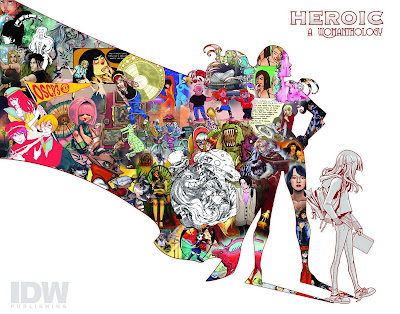 COVER OF THE MONTH: VARIOUS - WOMANTHOLOGY: HEROIC What an awesome way to not only showcase the variety and medium of comics, but the creativity of it's female creative best. A cool extension of this style would be if silhouettes of the likes of Superman could be filled with photos of the real world people he has inspired. Highlighting, like this does, that comics is still a medium where positive role models exist. 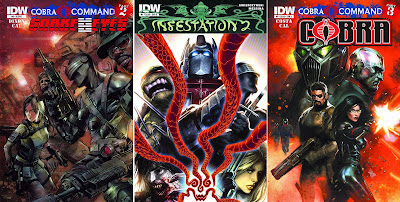 For more IDW January goings down, click the jump.
Posted by IADW at 11:48 am