Anyone who can say 'I didn't like Marvel's Heroes Reborn event' never read the first few issues of its Iron Man revamp. It reinforced two franchises at the same time and was stainless in it's execution. 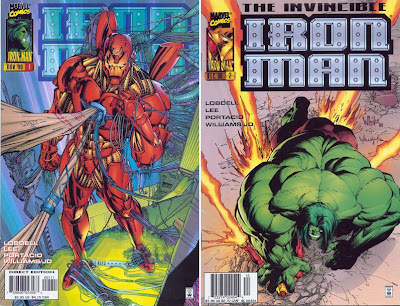 Writer Scott Lobdell brilliantly scripts a truly arrogant and blunt Tony Stark. A corporate man so removed from the public, his employees have become just the disgruntled minority HYDRA can exploit. As the group make their move on Stark's Gamma technology, the man who lives on the edge at the top of the world soon comes toppling down.
The word 'Gamma' is like 'Bamf' - it only relates to a select few. And he's not only here, he's born in these pages. In fact whoever thought of tying the origins of The Incredible Hulk and The Invincible Iron Man together is an unsung 110% genius.
As Bruce helps HYDRA to access the Gamma Core in the hopes of dismantling the weapon he is ashamed to have created, Madame Hydra turns on her promises, setting it to obliterate the entire eastern seaboard. Trapped with the device, Bruce drives it underground in the hopes of burying the blast and saving billions (not to mention his secret crush Liz Ross). You can guess how that ends for him... 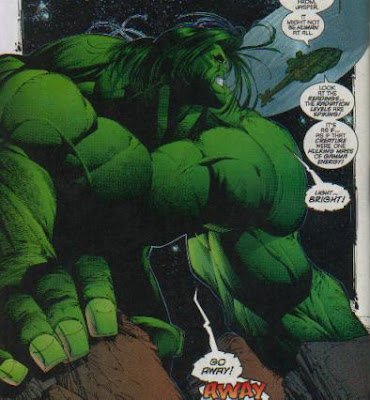 That disbelieving helicopter there, also happens to carry Tony Stark, aiming to investigate the security breach in an attempt to reconnect with life. When the Jade Giant brings down said vehicle in a rage, Stark has to turn to the red and gold flightsuit that took the life of his best friend 'Rebel' in order to save his own.
Successful, Stark finds Liz weak in the arms of the Hulk, who still harbours Banner's feelings for her and issues the following warning; 'Go away iron man! Go away or be smashed!' See? Hulk naming Stark's alter-ego naturally fits!

What follows is a clash of the titans, aided immensely by the artistic skills of Whilce Portacio. His unmatched knack for page layouts, scale and atmosphere actually makes HYDRA (especially Madame Hydra) look like a militant force and the Hulk look like a 'hulk'. He's enormous!

As the conclusion of their slugfest attracts the attention of The Fantastic Four, Tony finds himself battered, on the run and in need of aid. Virtually friendless he turns to Pepper Potts, a woman he just fired. However, as The Thing knocks at her door, another employee who lost everything by buying into Stark's corporate dreams takes steps to exact his revenge.
If this series had stayed this tight knit and dark-ish without having to mix with some of the more cheesy titles in the rebrand, it could've easily outlasted the Heroes Reborn event itself. Personally, it is still the origin story I prefer for both Bruce and Tony - and if you give it a whirl, you just might find it becomes yours too.
Posted by IADW at 12:54 am