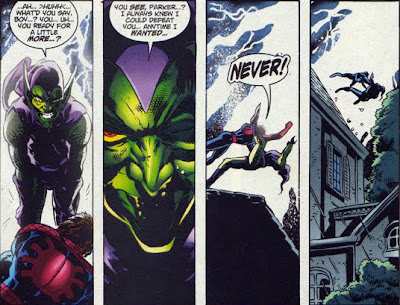 Truth serum in effect, I'm not sure why I picked up Peter Parker Spider-Man Vol2 #25 originally. I'm a huge advocate that Doc Ock ranks above Norman Osborn as Spider-villain numero uno and when it comes to the goblins, my favourite flavour is Hobby not Green. Still I have to go on record and say this is the definitive Norman Osborn/Green Goblin story (sorry Dark Reign) and it's as physical as it is psychological.

Written by Paul Jenkins, a guy who does characterisation better than most, Trick of the Light opens with Pete already captured by Osborn and on the brink of losing his sanity. Thanks to torture tactics, drugs and manipulations, Parker's the victim of a game designed to starve his mind into thinking the dark is his only friend.

For those of you thinking it's a war of cuss words and insults in the interim, you couldn't be further a field. Norman nurtures Peter through the withdrawal symptoms of living in the light, paternally introducing his prodigal son to his new home - and in turn revealing his own first steps as well... 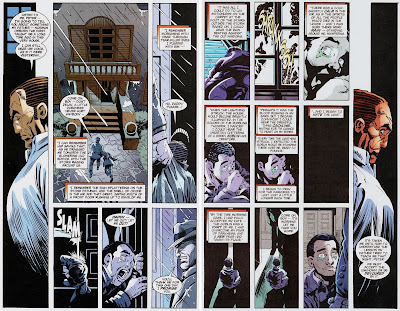 With this powerful insight into Osborn's past, we read into his attempts to make Spider-Man want the dark with a little more empathy. Empathy for a nutjob? That my friends is the power of Jenkins.

The other mastermind in this Hannibal Lector-ish mindgame of the Titans? Artist Mark Buckingham. In a book based on reaction, emotion and tension, he smashes the ball out of the park with every facial movement. Plus, the contrast of the way Mark draws Norman over the sinister and creepy Green Goblin really helps put that mental balance on a razor's edge. 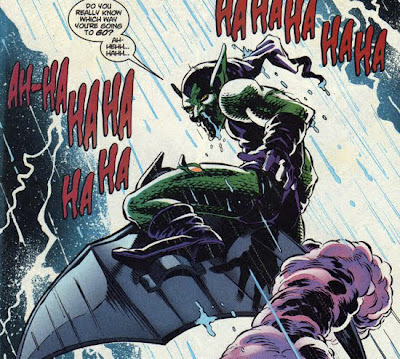 Sure it doesn't take a radioactively enhanced science student to figure out Pete escapes, but not only is his entrapment a riveting read, the victory is nowhere near as clear-cut as you think.

Next time you're in your back-issue bin, have a bit of a dive around for it if you haven't already. Just be sure to read it with the light on.
Posted by IADW at 9:00 am