Twice a week, Making A Mark gives an insanely talented artist some IADW brag-space. Today goes to Peter V Nguyen, an American illustrator who is gaining a solid footing with work for both Marvel and DC. His talent, like that other Nguyen guy (cough Dustin cough), is in the texture and the detail. Watch for Batgirl's cape folks... 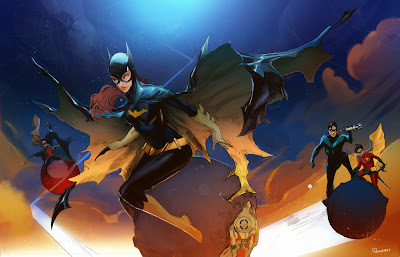 Simply move Batgirl and co from sitting on gargoyles to planets and 'BOOM!' - instant wallpaper material. Nguyen's original idea was to mix the bat-family with some New Gods technology, and while that may have gotten a little lost, I'm struggling to see it as a dark side.
And what do you know? Peter's gallery actually allows me to restore the Making A Mark tradition of having a Psylocke comparison piece between the featured artists... 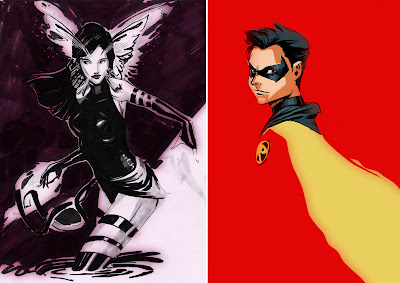 The butterfly effect is such a great visual, I'm glad it's highlighted here. Plus, look how effective that Robin shot is! Bold, just like Damien himself, Peter conveys all the character of one of Grant Morrison's best bat-contributions in one stern 'Don't mess with me' glance. 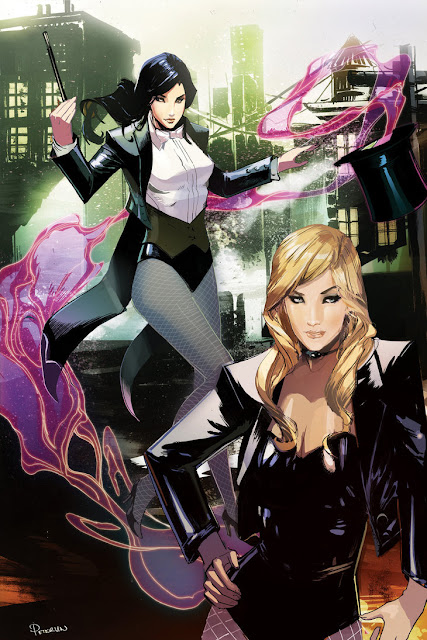 Now that's a pair you don't want to mess with! Looking at this gob-smacker of a portrait, I'm struck with the idea of how cool Zatanna and Black Canary would be as hard travelling heroes, replacing Green Lantern and Green Arrow. What do you reckon?
For more of Nguyen's work, visit him here on blogger after the jump.
Posted by IADW at 9:00 am