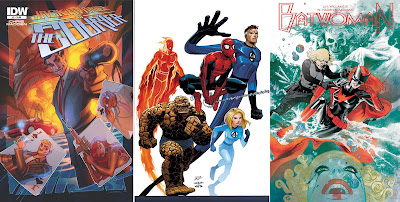 WATCHMEN – It’s where I scope out next month's comics and assign a hot new release characteristically with one of the five key heroes from Watchmen. While I may not be Ozymandias just yet, to me the month of November 2011 shakes out like this:
RORSCHACH (The Independent Voice): JACK AVARICE IS THE COURIER #1-5 (IDW) A whole mini-series done in one month! Meet Jack Avarice, a down on his luck kid whisked into a spycraft world deadlier than any he's ever imagined. Shaken, not stirred action that you won't have to devote half a year too starts this Wednesday.

SILK SPECTRE (Stops traffic with looks alone): BATWOMAN #3 (DC) Saying 'J.H. Williams III on Batwoman is a class in fine art in print' is like saying 'Politicians can rarely be trusted'. It's more than a little redundant, but it lets you know your vocal chords still work. 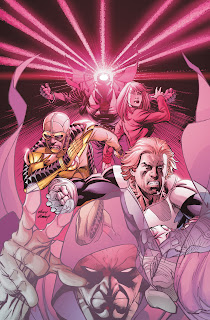 THE COMEDIAN (My Rank Outsider): T.H.U.N.D.E.R. AGENTS #1 (of 6) (DC) The last series criminally cut short like it was, it's awesome to see Nick 'anything I write is awesome' Spencer quickly heading up another shot at stardom for the team whose powers could save the world - if they don't kill them first.
NITE OWL: (The Dependable Goodie) FANTASTIC FOUR #600 (Marvel) Anniversary buffets are good for four things; chicken wings, garlic bread, cheesecake, and a nice drop of something decent. Marvel swap the standard menu for Epting, Lenil Yu, Dell'Otto and of course that Hickman guy adding in a few words here and there and find it just as filling. Bring a plate.
DR MANHATTAN (The Giant Neon Blue Guy In The Room): AVENGING SPIDER-MAN #1 (Marvel) God bless the return of a team-up book! When Joe Maduiera drew Spidey in Uncanny X-Men #346 it blew my wall-crawler lovin' mind. His video game/manga style nailed Spider-Man more so than any X-Men character he'd ever tackled. Now Joe Mad's back in the monthly game, and there's a whole Moloid army for him to have Pete and the Red Hulk smash their way through. It's win, win! 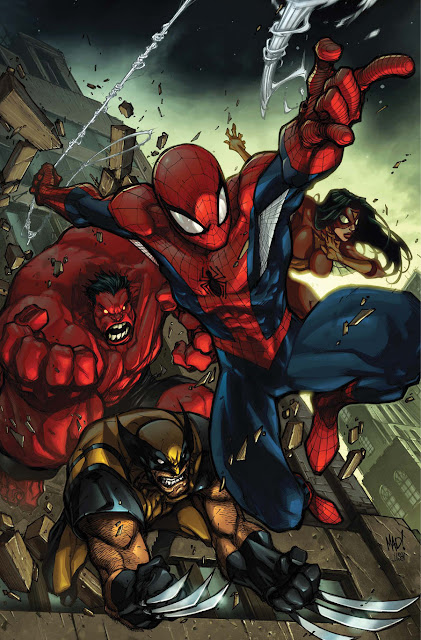