THE DREAM TEAM: My Challengers of the Unknown Line Up

The Challengers of the Unknown. It's one of comics all time greatest names and right now it's sitting on the shelf. If I could take the DC property and create from it a team that spans their collective universes (universi?) with the exploration of the undiscovered, here are the eight crew members I would run with; 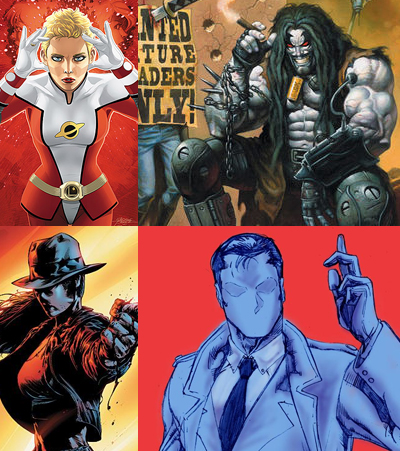 Saturn Girl: Opening up the world of the 31st century is nothing compared to the doors of the mind this Legionnaire can tap into. A versitile ability in any environment, Saturn Girl's vast experience and inter-planetary knowledge makes her invaluable as co-team leader.

Lobo: The 'Batman' of the team, the Main Man would never join a team of travelling do-gooders, but he'd find a kick out of their varied adventures keepin' his bounty hunting boredom at bay. His unpredictability and rep would mean the team would have no choice but to keep him round.

The Questions: Deducing the mysteries of the unexplained isn't a case for one Question, but rather a journey for two. Vic and Renee prove no matter how small a group the team is splintered into, The Question is always on hand to answer. 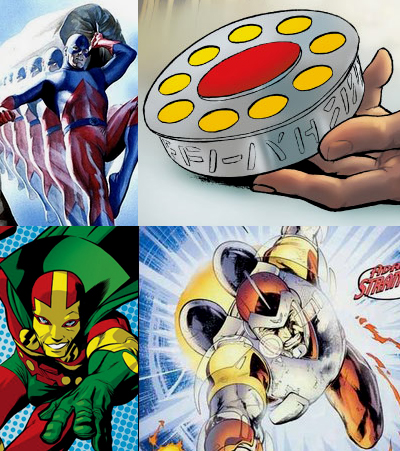 The Atom: Ray Palmer, founder of the new Challengers of the Unknown, wants to a team that doesn't just 'super-hero', but one that truely benefits mankind by their adventures. Play it forward, not avenge it after - now that's a challenge!
Dial 'H' For Hero: Never knowing what powers/identity the magical dial will see Robbie Reed possess from adventure to adventure means the unknown no longer surrounds the team - it's inside them as well.

Mr Miracle: The ultimate escape artist brings his own exclusive know-how and technology to the table. In return, the Challengers offer the semi-jaded New God the all-new inescapable situations to fight!

Adam Strange: The average Joe of the team comes with a jet-pack and raygun. With the Zeta technology having zapped his beloved Alanna to places unknown, Adam joins the team in the hopes their journey will lead him back to her.

Who would be in your Challengers of the Unknown?
Posted by IADW at 1:17 am