PANEL BEATER: Dan's Comic Of Thanksgiving - Wolverine And The X-Men #1 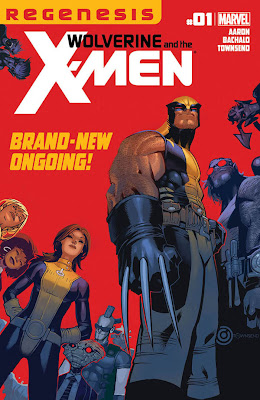 Mutation: it is the key to our evolution. It has enabled us to evolve from a single-celled organism into the dominant species on the planet. This process is slow, and normally taking thousands and thousands of years. But every few hundred millennia, evolution leaps forward. For the X-Men comics, that moment is now.
It's been two months since a Comic of The Month post last struck IADW, so now moving countries has finally stopped, I'm slamming on the brakes and offering 'Thanksgiving' for Wolverine and the X-Men #1. Easily the best read of the last two months - DC 52 included.
First off, let's just give a big hand to the cover design of this issue. It's modern, fresh and well thought out - just like it's contents. As a designer by day, it's nice to see a cover that screams from the shelves 'Comics are modern media too'.

As a whole, WAXM #1 uplifts the entire X-franchise. While I'm an unabashed drooling fan of artist Chris Bachalo, who is really on form here, the book's success is just as equally due to the tone and characterisation established by writer Jason Aaron.
With a mutant ability to slip humour in at short notice, Aaron does what all great writers on the book have done (Whedon, Morrisson, I'm looking at you) - stripped the concept right back to it's core. A school whose students just happen to have wings or peal-able skin and their headmistress can pass through walls.
Where as Chris pulls a marathon effort by colouring his own art, proving what you see is how he intended it, Jason dedicates the madcap, new reader friendly issue to the memory of his nephew Dennis, making it an extremely personal piece for both.
Speaking of pairs, it takes three brilliant pages to cover Wolverine's motives for headlining the new school and always a man with a few friends, he's not alone for long. Where Whedon built his castle on the love of Kitty and Colossus, Aaron looks set to build his on the history of the 'Cat and the Wolverine - proving what a great duo they make. 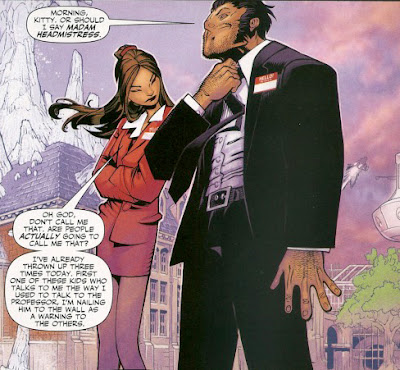 Kitty hasn't read this good since Whedon or the early days of Excalibur. As the pair try and put a cohesive face on the new Jean Grey School For Higher Learning, they come under inspection by the New York State Department of Education. (Other X #1's have led with Magneto - piff!)
Shortly, what starts out as a school where even the bathrooms are part of the Danger Room, ends up threatened by the new Hellfire Club and separately overrun by mischievous mini nightcrawlers from another dimension, before the inspection is through.
Luckily, Wolverine's 'staff' include Rachel Grey, Iceman, Toad (the Janitor) Hank McCoy and Husk (from Chris's Generation X days). The look of all whom the artist has breathed new life into, especially Beast and the new flock of students. Visually distinctive and cool, Broo, the Brood escapee with a high IQ in place of bloodthirsty yearnings and Kid Gladiator are highlights, especially as the latter tries to inflict his royal status upon his "earthling" classmates.
Oh and how can you forget former X-Force superstar, Doop? He's cool enough without rewarding fans with his decipherable messages... 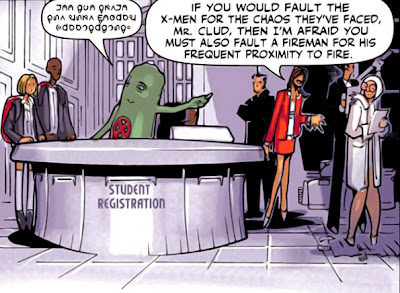 How you ask? With the same X-Force's handy dandy Doop Translator card. You did keep yours didn't you? Well, I've got your back... 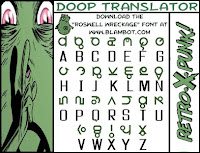 I'll let you figure that top one out (Click to enlarge). It's classic comic/reader interaction at it's best. Like Zatanna, if she were a floating green sack with eyes.
The way Aaron's humour and dialogue is matched by the facial expressions and style of Bachalo reminds me of the awesomeness of the Asterix series of books, and in a similar vein will disappoint few readers who give it a whirl.
Plus after years of having Wolverine solve everything with his fists, having one fight free issue proving his smarts is long overdue. The Marvel cheerleader has brains people. It's all proven here.
Posted by IADW at 4:07 pm