Ever since I arrived in Western Australia, Ozzie's keep advising me March is the month where the temperature really goes berserk. For March 2012 comics that job goes to Image. The kid gloves are coming off, with even more A grade debuts, including - Jonathan Hickman's The Manhattan Projects #1! The best four covers of the monthly offerings shake out like this; COVER OF THE MONTH: FIONA STAPLES - SAGA #1 No it's not 'Rihanna with child', it's Saga, the love child of writer Brian K. Vaughan and artist Fiona Staples, plus a man who puts Princess Leia's hair curls to shame. What's all this got to do with the fate of the galaxy? Beats me, but sure will be fun finding out in a double-sized, ad-free issue - for the normal sized price! Beat that DC and Marvel!

Image says; Y: THE LAST MAN writer BRIAN K. VAUGHAN returns to comics with red-hot artist FIONA STAPLES for an all-new ONGOING SERIES! Star Wars-style action collides with Game of Thrones-esque drama in this original sci-fi/fantasy epic for mature readers, as new parents Marko and Alana risk everything to raise their child amidst a never-ending galactic war. The adventure begins in a spectacular DOUBLE-SIZED FIRST ISSUE, with forty-four pages of story with no ads for the regular price of just $2.99! 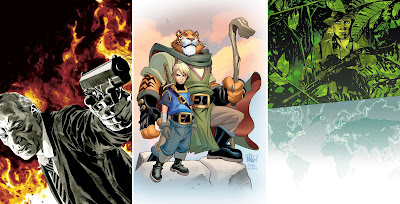