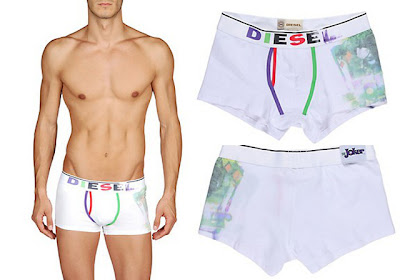 Whose giving you underwear this Christmas? You know someone is going to, it's almost a law of physics. But will their 'gift' actually have super-powers built right into the fabric?

If not there is still time to spin their eyes the way of the DC Comics Super-Hero inspired Intimate Collection by Diesel. But more on that in a minute. Promo vid first, cool power-gifting under-roo's second.

Ready to add some designer fuel to your wasitline? Here's the abilities each offers you;
BATMAN These Dark Knight's reveal a hidden armour over time.
THE FLASH Thermo-sensitive, watch the design heat up at the same time you do!
GREEN LANTERN In blackest night, this print glows of the energy of the previous brightest day.
THE JOKER Watch as a photo print acid effect mimics the Clown Prince of Crimes infamous acid attack.

Yeah smartie, the clown Prince of Crime in a 'Super-Hero' range, but who's to say he won't switch sides some day? Joker, shoulder to shoulder with the Justice League? Now that has some possibilities!

To explore those you can create for yourself in a pair of one of these bad boys, visit Diesel.com or your local stockist today.
Posted by IADW at 1:33 am