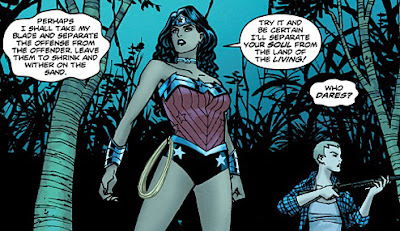 Not since Greg Rucka wrote Wonder Woman have the Gods of old manipulated through modern clothes and vices, and Diana been as good and ready with an axe, as she is a stern word of advice. Now thanks to the DC 52, all that great stuff is back with a vengeance and better yet it's soaked in pulp-tastic Azzarelloness.

Killer Centaurs and writer Brian Azzarrello aren't the only golden lassoes in this books arsenal. Cliff Chiang the artist pulls no punches either - after seeing his work, you just can't think of an artist better suited to this self assured take on Diana and her world than he.
Diana now stands focussed, not without humour and fights like a champion of a race of Amazons should. Speaking of 'Amazons', kudos goes to the creative crew for the way they deal with the sexuality of an island of woman. Where other books would shy away from the issue or endlessly explain it's presence, this title respects it's readers by making lesbians a natural/majority of the culture and environment such an island has embraced and created.

So I don't forget, the bold emblazoned sweet new logo has to get its props too. Inside the iconic covers, wayward chickie Zola is found to be pregnant with Zeus’ kid and Hermes enlists Wonder Woman to save her from Hera's wraith. All the while, the guy responsible is AWOL and Apollo has sinister plans to fill the void Zeus has created. 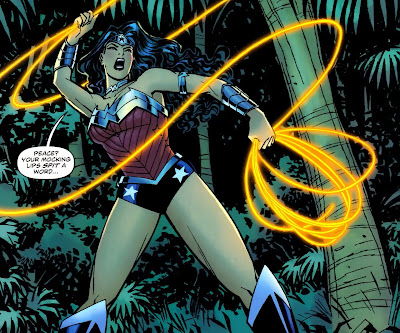 Yip that's right. For once Ares isn't the big bad Diana has to fight. Better yet, the Gods are so fractured there's no longer a clear division between 'bad' and 'good' and that blurring of the lines has spread to the entire cast. This approach leaves you second guessing everyone's actions and motives, and makes for a book that leaves you anticipating each instalment more and more, each and every month.
Posted by IADW at 12:11 am