How can a month that sees Groo vs Conan ever go wrong? Not at Dark Horse, their April solicitations have that and more! Better yet, of all the covers on offer in April, these four look set to stand top of the pops; 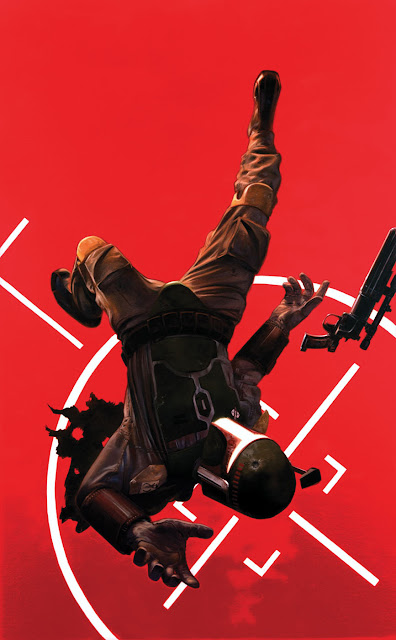 COVER OF THE MONTH: DAVID PALUMBO - STAR WARS: BLOOD TIES - BOBA FETT IS DEAD #1 Sparse and effective is always the way to go, whether you're killing one of the most popular characters in any universe, making fans think how cool Boba Tron could be or all of the above. Stickin' a man in carbonite, not so funny now is it Boba?
Dark Horse says:
The news spreads from one end of the galaxy to the other like wildfire: Boba Fett, the galaxy's most feared bounty hunter, is dead.
But when members of the team that killed Fett are themselves picked off one by one, Connor Freeman - the son of one of Jango Fett's clones - gets pulled into the action in a most unexpected way! 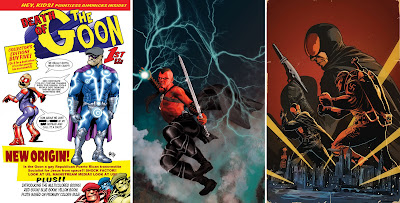 CLOSE CONTENDERS: (Click to enlarge)
Eric Powell - The Goon #39 Featuring a 'Big 2' parodying cover!
Jan Duursema - Star Wars: Dawn of the Jedi - Force Storm #3
Francesco Francavilla - Dark Horse Presents #11 The debut of Francesco's own creation; The Black Beetle!
For more April goodness, including that Conan vs Groo tussle straight from the horses mouth, click the jump.
Posted by IADW at 12:50 am