Image Comics have their foot planted on the gas pedal and April 2012 shows no signs of slowing. Supreme returns with Alan Moore's final tale on the character, Bryan Hitch's own America's Got Powers launches, along with Secret, a new series by Jonathan Hickman! Making sure the new releases don't hog all the glory, these four hot April Image covers are out for their pound of flesh too! 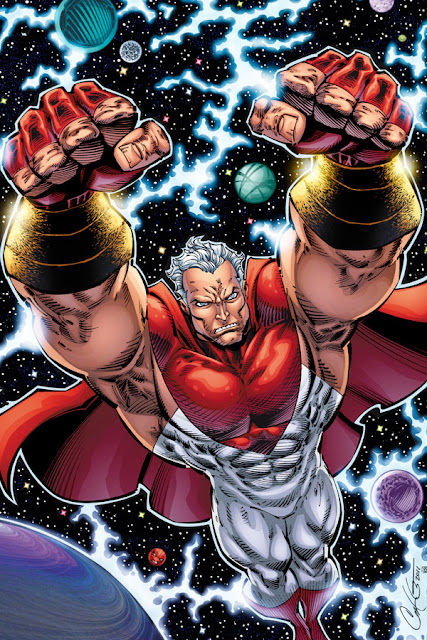 COVER OF THE MONTH: CORY HAMSCHER - SUPREME #63 Supreme is all those Superman stories you always wanted but an icon like Superman could never get away with. Imagination is in silver age quantities and by the looks of this cover getting more cosmic by the second. Welcome back big guy!

As Supreme romances Diana Dane he takes her on a tour of the Citadel Supreme and tells all of his innermost secrets just as Supreme's most hated nemesis, Darius Dax, makes a most unfortunate discovery: the key to defeat his abhorred adversary! It's most mind-blowing cliffhanger in the history of comics!

Scott Forbes - 27 Vol2: Second Set, Jenny Frison - Elephantmen #42, Bryan Hitch - America's Got Powers #1! For more April non-fooling around titles, click on over to Image Comics after the jump.
Posted by IADW at 12:47 am