Despite having a first class ticket to ride, some of comics best often get left to wonder the platform aimlessly. In Lest We Forget, I pluck a limbo-lingerer from the station and pimp their reason to return. This month, when the group that would become the pre DC52 Authority needed training, they turned to one man. His name; Backlash. 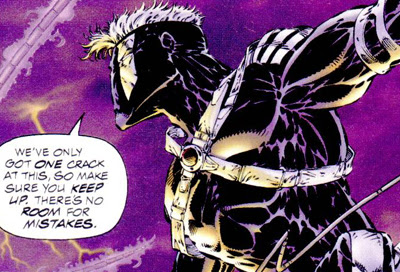 Over 3,000 years in existence gives a man a fair bit of time to learn a few skills. Marc Slayton having being a ninja, knight, military operative, WWII soldier and a few more jaw-breaking past-times throughout his, now stands as one of the best fighters on the planet.

Never a bloke to refuse an invite to a suicide mission and turn it into a victory party, the half breed Kherubim warrior always finds himself hip deep in shadow organisations, top secret plots and deadly assasins. From I.O. to Team 7 his allegiances have fill his adventures with contacts, who he can count on with his life and those all to willing to take it or sell it to the highest bidder. 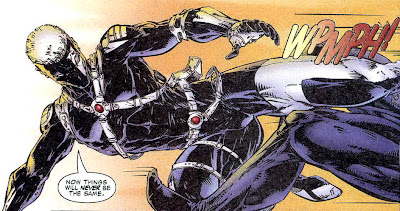 While his father died sinking his birthplace of Atlantis to entrapp the last of the vicious Drahn alien race underwater, Marc's telekinetically generated (and ultra-cool) psychic tendrils are always ready for the day he must use them in confrontation with his son Aries, a puppet of the megalomaniacal Kaizen Gamorra.

HOW I’D BRING BACKLASH BACK: From Checkmate to Talia's League of Assasins, Backlash would explore, ifiltrate and counter-act the various shadow societies and organisations of the new DCU, not just in the modern day, but throughout time and space as well.

Like a timeswept James Bond, Marc would trip from ancient Egypt, Japan and the middle ages to alien throne-worlds, races and more, in order to outwit, outlast and outplay them all. Backed by his brothers in arms, Team 7, Slayton would pull no punches in taking on enormous odds, but sure dish more than his share out in the process!