LIKE A VERSION: Darren "Daz" Tibbles Reimagines The Avengers For School 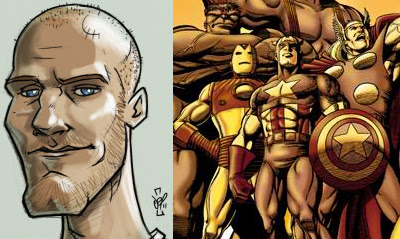 If you thought stealing candy from a baby was tricky, you've not tried going somewhere without running into word of The Avengers. Their musclebound movie is a Hollywood hit before it even opens, making them perfect candidates for the first instalment of Like A Version.

Like A Version, similar to the singer who sings a similar note, spotlights an artist who takes an established pop icon, adds a twist or two of reinvention lemon and creates their very own 'Madonna'. This time it's fellow Australian Darren "Daz" Tibbles and The Avengers. Behold! 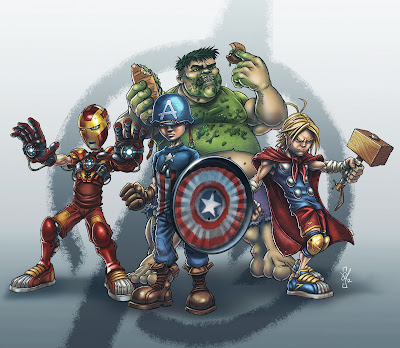 His first artwork of 2012 a designated 'Hulk SMASH!' School Yard Avengers is a concept worth exploring. Says Darren "I want to do a school yard background with them surrounded by a gang of bullies (Possibly wearing Skrull Masks) If I get time tomorrow I'll get onto it."

Let's hope he does! What do you think and who else would you add? A cheerleader Ms. Marvel? To see more of Darren's work, click the jump.
Posted by IADW at 11:30 am