At a Christmas party there are always a few no shows and in terms of comic sales for the month of December 2011, ten of DC's shiny new 52 titles failed to make the Top 100. This is just one factor that saw Marvel regain the overall lead by a slim margin of 1.33% unit share. While Image Comics took out 'Publisher #3', DC recovered by continuing to locked Marvel out of the Top 6, which went a little something like this; 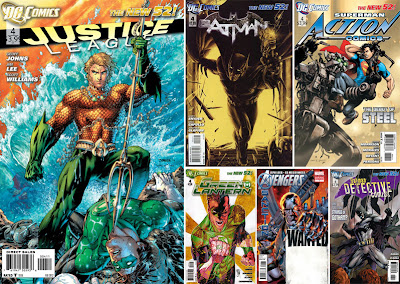 MY THOUGHTS: Marvel's going to need a massive hit to crack those top four spots. Will Avengers vs X-Men rise above Geoff Johns run away train Green Lantern or Grant Morrison's return to Superman? Being 'event tired' I'm thinking not, but it will be interesting to see.

Of the ten 52 titles knocked out of the Top 100 (Mister Terrific, Captain Atom, I, Vampire, Voodoo, Static Shock, Hawk & Dove, Blackhawks, Sgt. Rock and the Men of War, OMAC and Blue Beetle) I feel sorriest for Mister Terrific. I know the odds were against most of these titles from the offset, but the writing on Mr Terrific was loaded with sweet, sweet potential - and hopefully potential still to be explored.

(Statistics via Diamond Comic Distributors)
Posted by IADW at 1:01 pm