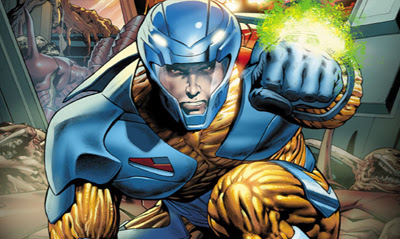 If you spent part of the 90's wondering 'Who was 'The Visitor'?', trying to explain the coolest hunted teens aren't muties, they're Harbingers, and thinking Jurassic Park was a luke warm trial for Turok The Dinosaur Hunter, we share a similar bond.
Now the April solicitations of other publishers are out, all eyes are turning to valiantuniverse.com - home to the latest news on the return of its namesake, and its debut title, May's X-0 Manowar #1 by New York Times best-selling author Robert Venditti and Eisner Award-winning artist Cary (Conan) Nord!
While the barbarian turned galactic war machine was a pretty logical first choice, if you are a fan watching one of your favourite brands burst back into life, you can't help but emit a bit of drool over the thought of who could follow. With Solar and Turok currently at Dark Horse, here are the four Valiant Valedictorians I hope highest for; 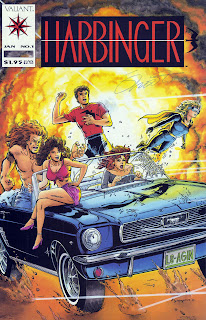 4) HARBINGER That cover ladies and gents I place as one of the best in the history of comics. Should Harbinger return, I hope the first issue salutes that iconic Barry Windsor Smith greatness. This title was also one of the first places I saw a 'fuller figured' female hero!
Toyo Harada is the world's first Harbinger - an omega level Harbinger whose psionic abilities make him a God, and he's used them to amass a global corporate empire.
Out to collect lesser of his kind to help him steer the world in his direction, he stumbles across Pete Stancheck. Except Pete didn't need stress to trigger his powers, he can trigger his own. This makes him the only other omega known alive and a major threat.
Quickly learning the darkside of Toyo's Harbinger Foundation, Pete starts to form an army of his own. One to remove the madman off the board, before he does the same to them. 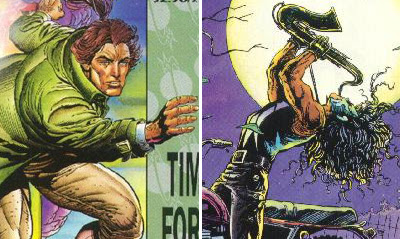 3) TIMEWALKER Call it 'Quantum Leap syndrome', but I love the idea of a guy who you never know where in time his adventures are going to land him from one issue to the next, or what kind of allies and villians he may already have waiting for him there.
Ivar and his brothers are immortal, ageing slowly, they are strong, fast and heal rapidly. However Ivar is one step ahead or behind or his siblings, as he has the ability to sense time arcs that alow him voyage through the time stream, never aware of when he will end up, but always praying for that one arc home.
2) SHADOWMAN Sure he's had a few video games, but I'm talking the Shadowman before he was famous. The long haired dude who rode around on a motorbike, fighting the supernatural and playing the sax. He's the Shadowman I want back.
Musician Jack Boniface escaped the clutches of death, only to find when darkness falls he is freed of any fear and set out against the demons of the night. What's more, the man who was never a fighter has found himself craving each sunset and loathing each sunrise. Tragically Jack is now his own jazz story and his blues is far from sung. 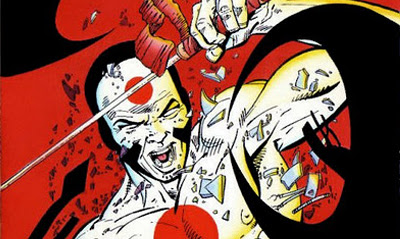 4) RAI In a way that might get me shot, I think of Rai as Japan's Judge Dredd, only cooler.
The living immune system of The Host, a machine which now covers Japan, Rai protects the fifty billion who call the construct home in the year 4001 A.D. But not all people want to live under his creator, Grandmother's rules. The Anti-Grannies (cool name huh?) believe Japan can and should look after itself, and their extremist support base is growing...
What titles do you miss from the previous Valiant lines?
Posted by IADW at 11:30 am