When you've had Bruce Wayne stamp his bat-boots over box-office records worldwide, the only question that follows is 'What will you do for an encore?' Sure director Christopher Nolan's modern day Batman based movies come to a halt after this year's The Dark Knight Rises, but that doesn't rule him out from spinning-off into a flick of one of Gotham's other masked vigalantes.

In fact Guy Bourraine Jr suggests one hell of a wicked option, and he's so on top of the 'subliminal messaging to the folks at the WB' curve, he's even created a fan poster about it; 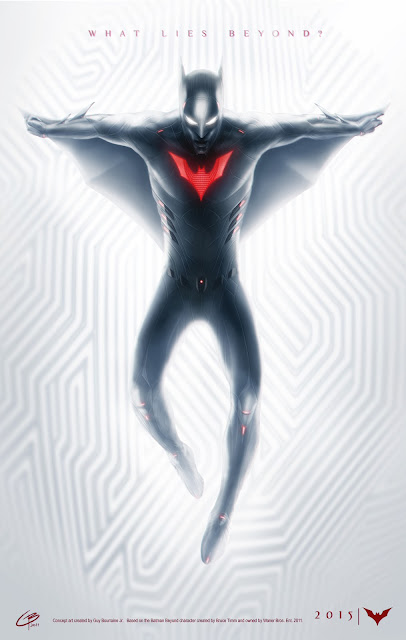 Yeah, I couldn't stop staring at it when I first saw it either. Batman Beyond, set in a futuristic Gotham, would not only allow the special effects and art design teams of the movie to push the boundaries, Nolan would give a huge shove to a DC franchise that doesn't always get the attention it should.

Now while I go back to gazing at that fantastic fan-work (and realising I just put 'this year' and 'Dark Knight Rises' in the same sentence), you can check out more of Guy's art, right after the jump.
Posted by IADW at 2:22 pm