YOU REMIND ME OF THE BABE: Archaia Set To Explore The Origin Of Labyrinth's Goblin King 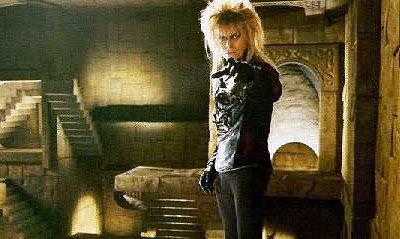 David Bowie has one of the best (not to mention most distinctive) voices in all music history, regardless of genre. When he turned into the Goblin King for Jim Henson's movie Labyrinth, he took the role to heights and left thousands of fans across the globe trying to do tricks with a tennis/glass ball, they'd never thought of before. Me included.
Now comes word Archaia are looking to tell the punk Goblin King's origin later this year in graphic novel format, and that news alone has this Bowie/comic fan dancing in the streets.

Speaking with Shelflife, Archaia editor-in-chief Stephen Christy said the prequel will deal with the tragic story of how Jareth, the Goblin King, came to the Labyrinth in the first place. Adding that illustrator Brian Froud, father of Toby the kidnapped baby in the original film, and Jim Henson's partner in the realisation of creating both this world and that of The Dark Crystal, will be overseeing the look of this addition to the Labyrinth franchise. This means he's doing all the character designs, covers and conceptualising. Can't wait!

For the Shelflife interview click the jump, or for a little Labyrinth to pick your day up, click play below.