The real Justice League takes on threats like Darkseid and The Key before they even sit down to breakfast. This Justice League battled the Weatherman and even paused to save a cat trapped under a house from the madman's technologically induced hurricane.

Now I know what you're thinking, 'In a hurricane, wouldn't the cat be safer under the house?' I say to you 'Nay'! This film/series pilot's focus on character rather than scale is what still places it's made-for-tv goodness right into the big leagues. 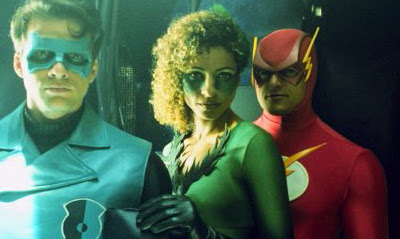 Availability of this flick may be sketchy in parts, but in New Zealand it even made late-night TV. A quick 'hit record' later and the result was one of my most watched tapes, in those deadly 'want to watch something, but not really anything' moments.
Sure that's agreeing the plot ain't that hard to follow, but not every movie strives to be Superman II standard. For me, what rises this flick from the negativity it usually incurs are the various 'off camera' moments the individual Leaguers have throughout the film, relating to the interviewer/ audience their various reactions to each other and difficulties their powers have presented them with in the past. 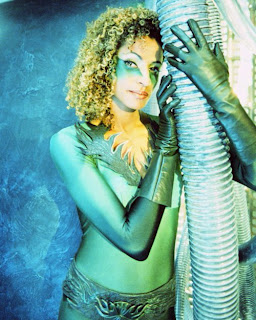 A novel idea even now, as the in-story segments continue to see the League hunt down a crazed meteorologist holding New Metro hostage, you can't help but think how these '60 minutes-ish' snippets could've gone, had the series been picked up.
Though Justice League may sport the same feel as The Adventures of Lois And Clark in parts, don't expect the Man of Steel to save the day - this loosely Keith Giffen and J.M. DeMatteis inspired Justice League consists of;
Ice (Kimberly Oja), a meteorologist who after an accident made while discovering her boss is the big bad, soon gets drafted into the JLA.
The Flash (Kenny Johnston), Barry Allen is great around the house, but not fast enough to balance a job or bills.
Green Lantern (Matthew Settle), A smooth talking salesman, Guy Gardner wears Kyle Rayner's mask, but is 'Hal Jordan' with the ladies.
Fire (Michelle Hurd), B.B. DaCosta is a struggling actress who attracts a teenage crush that threatens both her identities.
The Atom (John Kassir), science teacher Ray Palmer.
And later, Martian Manhunter (David Ogden Stiers).
The costume Gods didn't do their department any favours. Flash and Fire escape the best, but the 'wardrobe malfunctions' are nothing compared to the mixed bag that is the show's special effects. The Weatherman's winds and tidal wave are pretty crude at points, but Green Lantern's ring willed weapons - especially that chainsaw are freakingly sweet. 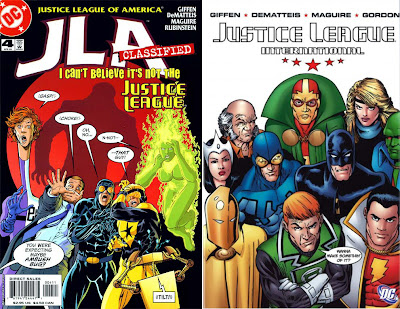 Having a show where the heroes struggle with real life and being the 'Earth's Mightiest' does have legs, and Justice League does its best to run on them. While Smallville did 'loosely based' and got away with it, this might've been better served if it took Keith and J.M.'s other masterpiece title; "I Can't Believe It's Not The Justice League!"
One piece that could've stayed on the cutting-room floor: Under attack, their submarine HQ is being heated, cooking the Leaguers inside. Speaking to his team as they make a break for the surface, Martian Manhunter qwips "Don't worry about me. Where I come from, 300 degrees is a beach day!"