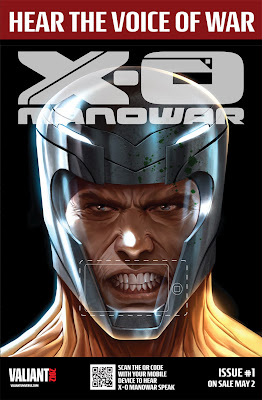 One thing I like about my smartphone? It makes me feel like I'm in the computer centre of the movie Minority Report. Touch screens, QR codes and more, all in my pocket and finally making it feel like the 'new millennium' has actually arrived.

Now Valiant has unleashed plans to yank the medium of comics even further inside the same era, with comic covers that actually talk to you - all through QR tech and all starting with this May's X-O Manowar #1.

While comics talking to you previously meant you needed to put down your Batman and step outside for a breather, least become the star of the next Excorcist movie, Valiant has embraced the digital age with a variant cover few can resist.

The 1:50 cover by Jelena Kevic-Djurdjevic (who can draw the hell out of a normal cover on a good day), will have a place for your smart phone to sit post-QR Code scan, that will activate a voiced video of the alien-armoured barbarian, directed at you the viewer like so;

Created by Neal Adams' Continuity Studios and scripted by the title's writer, Robert Venditti, while the likes of Vampirella, Magneto and Sinestro will no doubt follow in the years ahead, Valiant is making it known that this relaunch is following no ones lead but their own.
Posted by IADW at 3:45 am