DO IT MOORE? I DID IT 35 MINUTES AGO. DC Names New Watchmen Comics 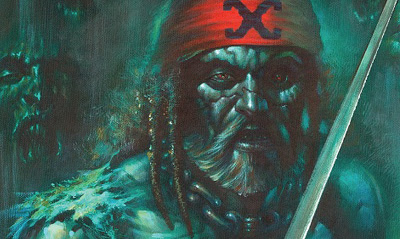 Watchmen - it's the comic book equivillent of a bank. An establishment of reknowned high-class, whose legion of followers have all invested heavilly within it's CMYK printed stocks. While corporate shenanigans of those at a senior level stalled Watchmen's movement, those on the ground floor did not waiver.

Some believed the 'bank' should become a vault, untouched for all time. Others dreamed its riches, now the basis for decades of accrued interest, would eventually deliver an equally high-point of return. For the latter, that point is now officially on the horizon.

DC Comics have announced seven Watchmen prequels for the middle of the year (plus a one-shot special), that while untouched by the original creative team of Dave Gibbons and Alan Moore, do explain where many of comics best have been recently (Amanda Conner, I'm looking at you). The rundown of Before Watchmen is as follows; 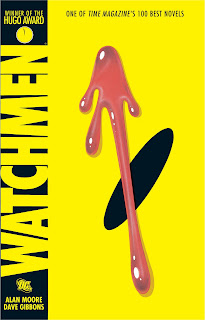 One new issue released weekly, each comic will feature a back-up two-pager Curse of the Crimson Corsair, written by Len Wein and illustrated by John Higgins (editor and colourist of the original super-hit respectively).
While Moore has already told The New York Times the project is proof DC is "still apparently dependent on ideas that I had 25 years ago" adding "As far as I know, there weren’t that many prequels or sequels to ‘Moby-Dick.’ ”, me I'm of two minds.
One part of me sees Watchmen as as close to a 'creator owned mainstream comic' as you can get, with a defined beginning, middle and end. The way the characters come on stage, and how they reveal themselves and their pasts adds so much to the experience of the book, to alter that seems pretty dangerous ground.
On the flipside, who doesn't want to see Azzarello take a crack at Rorschach or Cooke on Minutemen? Adam Hughes drawing Silk Spectre in Dr Manhattan? Should today and tomorrow's creators be denied such a rich cast, when they possess the skills needed to both pay homage and tell a great tale at the same time?
Sure Star Wars didn't help the word 'prequel' gain any fans, but Dark Horse continually puts out a multitude of great comics from all points on the far, far, away timeline, and what's more they have done so for years, on a monthly basis! 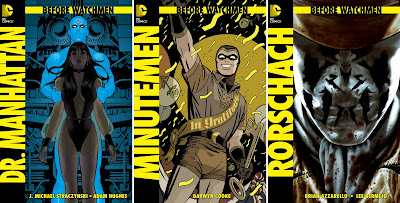 Watchmen has been a household name in comic circles since before many of today's newest fans were first brought home from the hospital. Should we limit their Watchmen experience to something even the most capable spoiler avoider becomes aware of before they turn the first page, or should we be aloud to enjoy fresh, respectful Watchmen adventures alongside them? As the Doomsday Clock of fandom moves one more minute to midnight on the back of today's press, we'll all know the answer soon enough.