ENDS OF THE EARTH: Sinister Six Story Arc Brings Dell'Otto Out To Paint

You have to hand it to Marvel, they do have 'Comic's Greatest Marketing Team' - and have had even before they were acquired by the House of Mouse. When it came to shining a light on upcoming Spider-Man mega-arc Ends Of The Earth, the crew rounded up the been gone far to long, mad paint skills of artist Gabriele Dell'Otto, and got him rendering Pete going head to head with each member of the storyline's newly reformed Sinister Six. 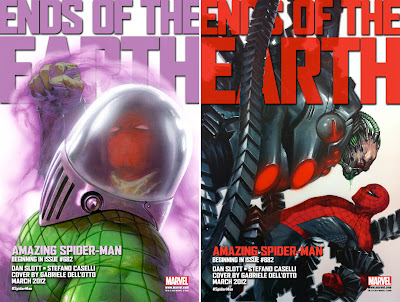 A team built to highlight the coolest Rouges gallery in comics (sorry Bats), these teaser posters of Doctor Octopus's new five best buddies may show the familiar faces have undergone a few wardrobe changes since the days of their classic duds, but as long as Mysterio's bowl and cape remain fairly untouched, I'm still one happy camper. 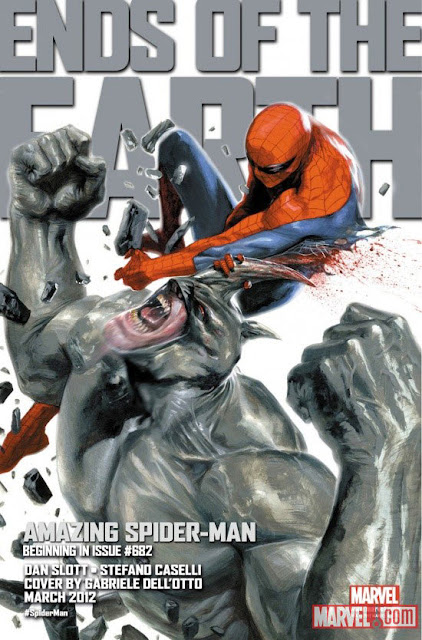 Wouldn't Doc Ock do the Sinister Nine? You know, a henchmen for each arm of the octopus and himself as the head? Add Vulture and Kraven... Or maybe mad scientists just love alliteration more than ego. Either way, this storyline promises to prove why the wickedly good Doctor is still Spidey's biggest bad, having recently fought and in somecases beaten the likes of Iron Man and Reed Richards!

Now armed with the allies to finish the job (namely Mysterio, Rhino, Sandman, Electro and The Chameleon), the storyline which ties into Spider-Man's 50th birthday celebrations will also see "Earth's Mightiest" step into the fray. Hopefully that doesn't just stop at just Pete's current team-mates on the Fantastic Four and Avengers, but also reaches out to some of his amazing friends. I mean who doesn't want to see Deathlok in on this?

Kicking off in March's Amazing Spider-Man #682, with writer Dan Slott and defining Spidey artist Stefano Caselli, the only thing sinister about this story-arc (apart from Otto's master-plan that is) would be to leave these bad boys on the shelf - look out for them!
Posted by IADW at 11:30 am