FANTASTIC FOUREVER! 'This Man... This Monster' Re-Covered In Felt 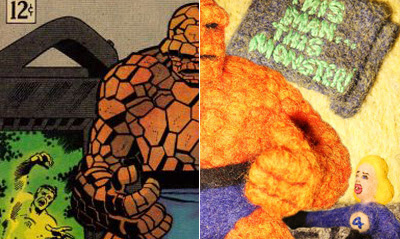 The story of a man who selfishly steals The Thing's powers and ends up saving Mr Fantastic's life, while ruining Ben Grimm's proposal to Alicia, few fans have understood how powerful this issue felt at the time of it's release. Now, thanks to Covered blog artist D. Campbell MacKinlay, everyone can bask in the landmark cover's cozy goodness! 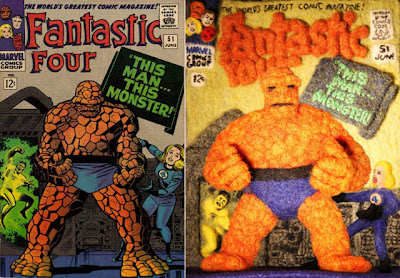 While comic fans and felt work artists aren't thought of as obvious bedfellows, you've got to be amazed at the detail MacKinlay has woven into the piece, right down to the cornerbox art and the Kirby-esque machinery in the background!
For 'the making of' this cover and more, visit David's own website and give him your heartfelt thanks, right after the jump.
Posted by IADW at 11:30 am