It's a common curse in this day of after credit teases that you have to sit through a mind-numbingly long list of crew and cast members, before you get the mere minutes of footage you desperately crave.
With Captain America: The First Avenger the wait was never that bad, due to the gob-smackingly brilliant patriotic posters turned 3D credit masterpieces that rounded off the blockbuster so nicely. However the original concepts were a little darker... 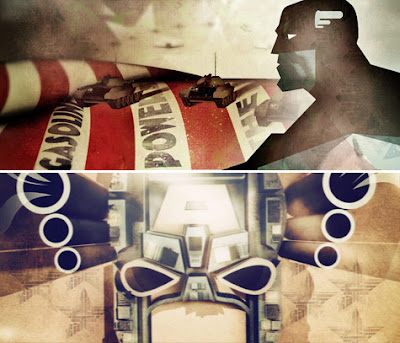 Done by the crowd at Rok!t, the title series' inspiration was always inspired by the retro feel of Director Joe Johnston's The Rockeeter other foray into super-hero flicks (the most under-rated comic film of all time). In particular, the Rok!t crew wanted to put an American spin on the Nazi propaganda film that plays in The Rocketeer, and hide the imagery in Captain America's opening scenes.
Speaking to Art of the Title, Steve Viola, Rok!t's Creative Director revealed that idea lasted right up until April, when news the credits would run post film - shot a hole in that plan. Never saying die, the crew bounced back with a 110% illustrated approach, were the propaganda based imagery would be based around Cap himself. Here are the original concept boards created from that genius (you'll want to click to enlarge these!); 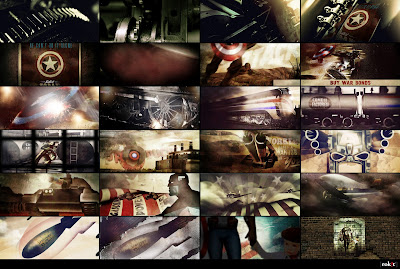 'Awesome' does not describe them. While it's a crying shame these beauties might never be animated, as the concept developed Joe lead the process towards more of a sequence saluting the posters that actually served duty during WWII.
The result? A series of end credits more creative and awe-inspiring then the entire product of many of Captain America: The First Avenger's competitors. Need a refresher? Say no more...

Now that's the stuff of living legend! Put what you think in the comments section or if you'd like to read the full interview with Rok!t's Steve Viola at Art of the Title, click here.
Posted by IADW at 11:30 am