Hawkman has been a high-flyer in my book ever since I first saw the mace-wielding museum curator take up arms in the pages of The Brave and The Bold. However, the mixed continuity he has suffered in between hasn't helped attract new fans to the head of the JSA. 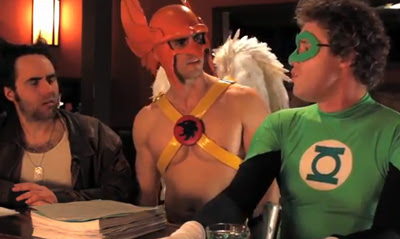 Despite stellar story arcs by Geoff Johns, Jimmy Palmiotti, Kyle Baker and Dave Gibbons doing their best, the Winged Wonder's flight path has gone on a downward spiral into comic book joke topic territory. Deciding to take advantage of that trend to create their own inflight movie, the folks at Frog Island have decided to shoot the Hawk pimping the established heroes of Hollywood for an 'in' (even Halle Berry's Catwoman)!
To see how Hawkman goes playing to Hal Jordan's ego, or just to hear Superman say 'douche sandwich' hit play to make with the funny.
Posted by IADW at 10:00 pm