LEST WE FORGET: Reopen The Power Company

Despite having a first class ticket to ride, some of comics best often get left to wonder the platform aimlessly. In Lest We Forget, I pluck a limbo-lingerer from the station and pimp their reason to return. This month, the company most ready to buy-in to the modern world of the DC52 - The Power Company. 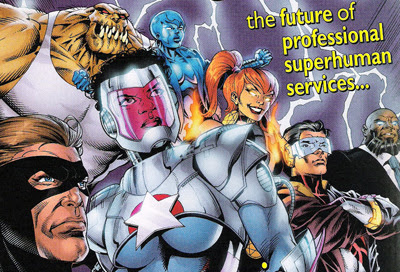 When corporate attorney Josiah Power's metagene is triggered mid-courtroom, he finds himself dismissed as a lawyer, but able to transform into a 7ft stone like creature, crackling with energy - one that even gives Superman reason to pause. Combining his two previous fields of expertise, Josiah creates The Power Company, set up up with a corporate structure as it's foundation rather than a team roster and one willing to work for whoever has the highest bid.

That structure I'm taking about was brought to life by a host of dynamic characters, including  associates Bork and Firestorm, standing alongside partners Witchfire - a pop star/mage, and Skyrocket, the former Navy member whose B-grade suit of armour, aloud her to show even more of the world the A-grade hero inside. 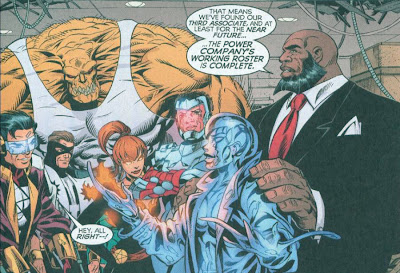 The Company's defining point of difference, the creative team. Kurt Busiek never writes a turd and he sure didn't start here. Furthermore what completed the books 'good, fun comics feel' was the accompanying pencils of artist Tom Grummett. This guy is ridiculously unsung in the comics industry! If you think Busiek and Perez went well together, then you definitely deserve another chance to check these two out in action, that is if DC will let you.

HOW I’D BRING THE POWER COMPANY BACK: Just bring them back already! No concept in the entire DC multiverse is more primed to hit modern audiences than a company of super-heroes and all the corporate plots and twists such a concept entails. Speaking of multi-verses, what about a company with branches on infinite earths?!

Just one contractual footnote I would add - use the original creative team. No one else could show Josiah and co. mean business like they do.