Twice a week, Making A Mark gives an insanely talented artist some IADW brag-space. Today goes to Redd, an American illustrator who self confesses her heart lies with DC, isn't bad at rendering a few Marvel's of her own (click to enlarge time)! 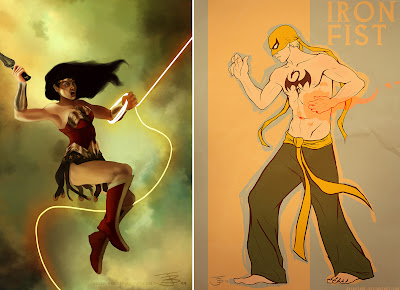 Voices over War is what Redd labels her Wonder Woman moment of reckoning. While you have got to dig that lightsaber effect she's given the lasso, putting her in more gladiatorial dress also makes the image pop. Keeping on a fashion wavelength, it's good to see Iron Fist drawn in pants that actually look like kung-fu pants! It's makes such a big change to conveying the character - likewise giving him a more realistic martial-art build! 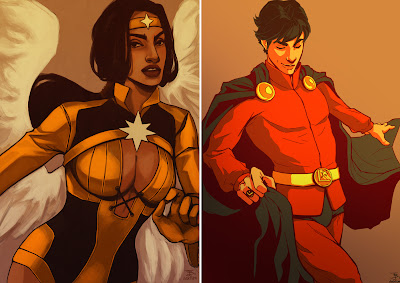 I'm currently trying to figure out a creative way to bring more Legion to IADW more often - these two powerful character studies of Dawnstar and Mon-El respectively just motivate me more to do so! 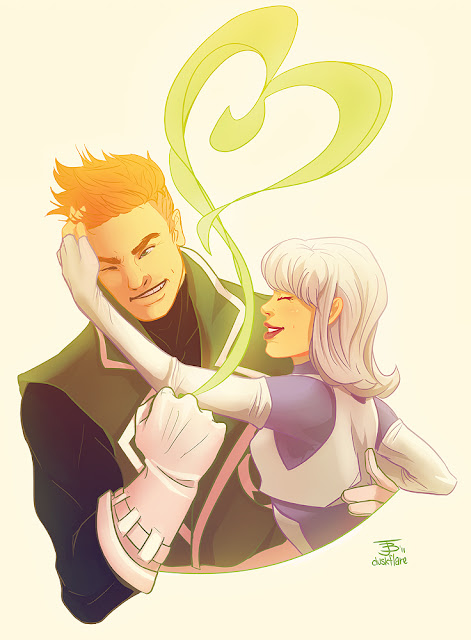 Now here's a super-couple you don't get allot of fan-art for! Guy Gardner and Ice are at the heart of what I think is the most touching 'relationship moment in comics'. While that's shelved for a future post, Redd once again gets to the heart of both characters, showcasing what makes Tora and her ring-slinger work so well as a pair.
What do you think?  Sound off in the comments section below, find more Making a Mark artists here or to see more of Redd's online artistic gallery, click the jump.
Posted by IADW at 11:30 am