Splash pages, you gotta love 'em. A blank canvas where the artist can hit you with a large dose of illustrated 'wow'. This week, it's my favourite splashie from my pull-list of the last month; Barry Kitson rendering Galactus being summoned by Reed Richards to intervene in the Kree/Inhuman war, and arriving unamused at the scale of the conflict he was asked to partake in. 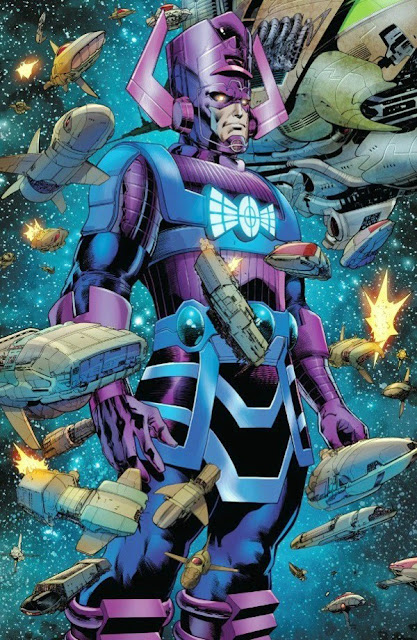 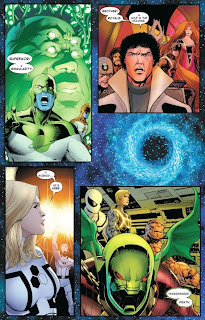 Barry Kitson is a freak in how his crisp clear lines can make even the most cluttered scene like an all out star wars seem easy on the eye to read. What added to the drama of this moment and made it so impacting, was the build up writer Jonathan Hickman gave the arrival of ol' purple boots on the page prior (left).
Back to Barry, he's doing some of his best work ever on Fantastic Four, and while every page of issue #602 literally had an 'Oh sh$%#t!' moment, he handled every single one of them with ease.
While Galactus interrogates Reed and Sue for calling him to such a minor skirmish, he only has to wait until the last page for the opposition of his dreams. Who is that? Look for Fantastic Four #602 to find out!
For more great splashies, click the jump.
Posted by IADW at 12:00 pm