ON THE FIVE: Five Quick Questions With Illustrator Marcelo Baez 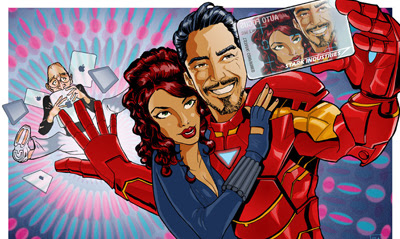 Welcome to the latest instalment of On The Five. Here, armed with five easily digestible questions, I chat to comic / illustration stars and fans about their passion, and what motivational 'play it forward' tips they can pass on, to folks like you and I.

Last turn at bat went to American Dan Jurgens, but today I'm sticking a little closer to home, with Australian based artistic gun for hire, Marcelo Baez. A long time friend of IADW, Marcelo didn't step straight into drawing the likes of 'Iron Man vs Steve Jobs' above (originally done for FHM), he put in plenty of hard yards first. Still, like most things worth doing, inspiration for his career came to him in the form of a ninja...

IADW: You've mentioned about how as a kid, finding a pile of dusty old comics in a second-hand store changed your life, turning you into the professional illustrator you are today. Can you remember what they were and what made them so addictive?

MARCELO BAEZ (MB): Marvel's G.I Joe comics back in the early 80's. My Mum actually bought me a Snake Eyes action figure a few weeks before I went into that old bookstore... then when I saw him in the comics and made the connection - I was fascinated! I loved the adventure aspect, and Snake eyes was so damn cool and mysterious. I always loved Spiderman too...

IADW: Many of us aim to draw comics as kids, but you've seen that dream fully matured and realised with your creator owned comic Diabla (available for ipad here). How does it feel seeing your own creation in print, and what do you say to readers about what's ahead?

MB: It's such a HUGE pleasure to see your work in print!! Getting positive feedback from readers is just magic... because lets face it comics are hard work, and it takes so bloody long! (for me at least... though I'm a lot faster now days). I'm actually working on some new comic projects this year, which I'm really pumped about, so you'll have to keep an eye on my blog! 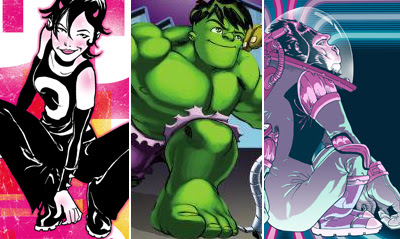 IADW) You have worked for the likes of Marvel, GQ, Men's Health and National Geographic. That's some pretty solid company. With that experience in mind, how do you feel about the health of professional independent illustration vs photographic and vector-art based online image libraries?

MB: Its difficult to say, I've worked on the other side of the fence as a designer and art director (AD) on a magazine. The editor and the AD want what's going to serve the story best, and when we were looking for illustrators, sadly the main issue is budgets.

But really any good AD on a magazine knows that most vector library art looks cheap and could turn up in any other publication, the same goes for library photography, but the risks are less I believe. I guess the health is good to very good!

IADW) What is an artistic tip you hold in your arsenal, you think up and coming illustrators need to know?

MB: I usually answer this sort of question with "DRAW EVERY DAY". Honestly, most young people that I talk to about illustration and comics just think they can do a drawing a week and that's it! If you want to draw for personal pleasure sure, one illo a month is fine... but if you want to be a pro... that's nuts!! I read somewhere that it called "ARTWORK" for a reason. This doesn't mean it can't be fun... But if you're serious about it, you have to have passion and drive!!

IADW) Who is your personal Superman / inspirational figure?

MB: I'd like to say BATMAN! But seriously I have so many (do you have a hour?). I'm inspired by postive people that want to make a difference! That energizes me... to create art and stories to inspire others! Pay it forward!!

A massive thanks has to go to Marcelo, for al his enthusiasm and time in doing this interview, it was greatly appreciated. To get your hands on his Diabla comic, or just to find out about the man himself, you can find Marcelo Baez online at Little Hammer Studios, right after the jump.
Posted by IADW at 12:22 am