THE ONLY PLAY OFF THAT MATTERS: John Carter / Avengers Super Bowl Commercials 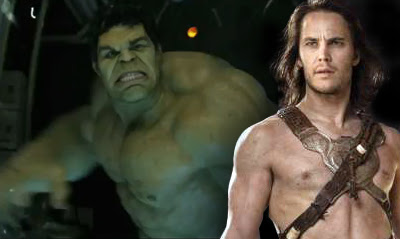 If you're reading this in the northern half of the globe, chances are your telly was set to one channel for a few hours out of the last 24, as the Super Bowl kicked into gear for 2012. Even if you aren't a fan, you probably had to zip it in the corner while the game was on, and hold out to share the mutual rewards of the prized Super Bowl super-expensive for super-exposure commercials.

The Lorax, The Dictator, Battleship and more were all movies that kicked for touch, but the two star quarterbacks came down to Earth's Mightiest Heroes, Marvel Studios The Avengers, vs Disney's John Carter adaptation - with the title role played by Taylor Kitsch (Gambit from X-Men Origins Wolverine (see not all that film was bad news)). The victor of this inner house of mouse brawl for it all? Well you tell me...

Sure John Carter wins on soundtrack and husky voice over dude, but as Stark says, The Avengers "have a Hulk" - and that always counts.
Posted by IADW at 1:40 am