While comic sales as a whole were up by a whopping 33.56% on the same time last year, January 2012 held a special place for DC Comics. Their new DC 52 not only locked Marvel out of the Top 6 sellers of the month, but the entire Top 10. Image Comics kept the title of 'Publisher #3', but with the clean sweep DC also claimed back the month's unit share lead over Marvel, by 2.35%. 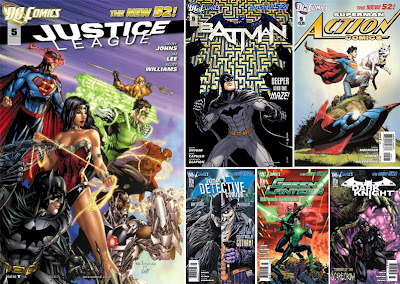 MY THOUGHTS: Add to the above Superman, The Flash, Batman and Robin, and Aquaman (in that order) and you have a Marvel, seriously hoping Avengers vs X-Men swings the ball back in their court.
Odd that an 'event' like AvsX is the replying salvo from the House of Ideas, when part of the fire coming from the new DC 52, is a focus on individual books doing their individual things.
Sure a Bat-book crossover is looming, but look at that Top 10 - four books belong to the Bat, and another stars his heavily trademarked mug beside the worlds greatest super-heroes monthly - so it's not like it's going to be forcing that many people to buy titles they're not all ready eyeing up anyway.
What are your thoughts?
(Statistics via Diamond Comic Distributors)
Posted by IADW at 2:11 pm