4 WAY SPLIT: Marvel Announces The Return Of Captain Marvel, But Of Whom? 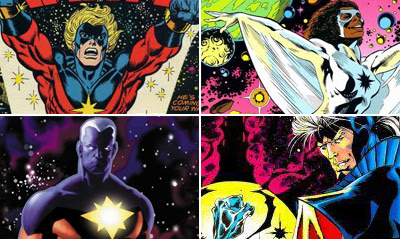 Well you didn't have to be a Reed Richards to realise once DC announced their 'Captain Marvel' would only be called 'Shazam', that their opposition would revive their rights to the name and return a Captain Marvel to their universe. But who will it be?

Multiple title-contenders bed themselves within the House of Ideas, so here are the main candidates and their chances for success... 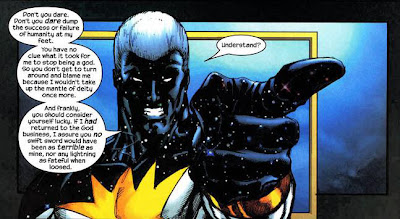 CAPTAIN MARVEL - Genis-Vell The cloned son of the original Marvel Captain Marvel, this guy had to handle having his growth artificially accelerated and starring in both an angst/fun series by writer Fabian Nicieza (top visual lower right) and a fun/buddy series bonded to Marvel sidekick supreme Rick Jones, written by Peter David (top visual lower left)!

Possibility: Sure Genis went omnipotently nuts and tried to destroy the universe, but hey it's Marvel - who hasn't? A great addition to the Marvel U in either era, he stands at 4/10.

More candidates after the jump;

CAPTAIN MARVEL (Monica Rambeau) Monica may now lead Nextwave and call herself Photon (which is two steps away from sounding like a fold-out couch - sure to strike caution into the hearts of evil), but there's always space for one of Marvel's leading ladies of the 80's. Heck in an earlier 'AvsX' she even did what Thor couldn't - got inside Magneto's 'impenetrable' force sheild for a little payback!
Possibility: Sure Marvel's teaser features a yellow chest insignia, not a black one, but hey printing errors have happened before right? I mean, what's Avengers vs X-Men without one of the best, most versatile leaders from the past of Earth's Mightiest? While I would LOVE it to be Monica, her chances stand at 6/10. 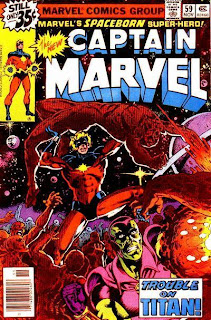 CAPTAIN MARVEL (Mar-Vell) The main man. A Kree soldier stationed on Earth, Mar-Vell was claimed a super-hero by humans, after a public battle with a robotic assassin sent to destroy him from inside his own race. Most known for his tragic and landmark death, Marvel's mantle has always been a prized piece.
Possibility: Yip there's art showing his return, but it's just too obvious. And if all those episodes of Murder She Wrote taught us anything, it's that it's never the one you think it is. Still, hedging my bets, his odds stand at 8/10. 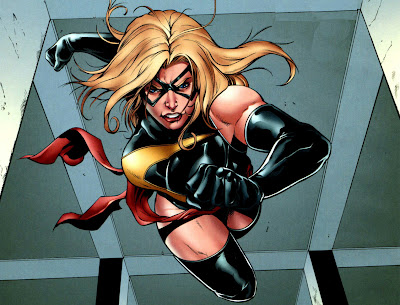 MS. MARVEL Long gone are the days where Carol Danvers' biggest claim to fame was in being Rouge's favourite power-snack. A former military agent that excelled in a male dominated feild, Carol has done the same after being affected by radiation from the original Captain Marvel, and standing among Earth's mightiest, as Ms. Marvel.

Having since been to Binary and back, one of Carol's original guises sported the yellow emblem Marvel now tease.
Possibility: There's no doubt Marvel have been positioning Ms. Marvel for a while now, so chances are she could finally get her due (just please, please, please don't change the costume too much)! While losing the butt-kicker with class name of 'Ms. Marvel' would be a loss, Carol's dream was once to be like the original Captain Marvel. In 2012 that dream could be realised. Odds; 9/10.
Posted by IADW at 4:27 am