DC Comics stirred curiosity weeks ago when they announced their 'Captain Marvel' would be getting revamped in a back-up feature within Justice League. There, the Geoff Johns written, Gary Frank drawn strip wouldn't just change the character's name to 'Shazam', but update his wardrobe as well. Today the New York Post, released the first look at the makeover of the 'World's Mightiest Mortal'; 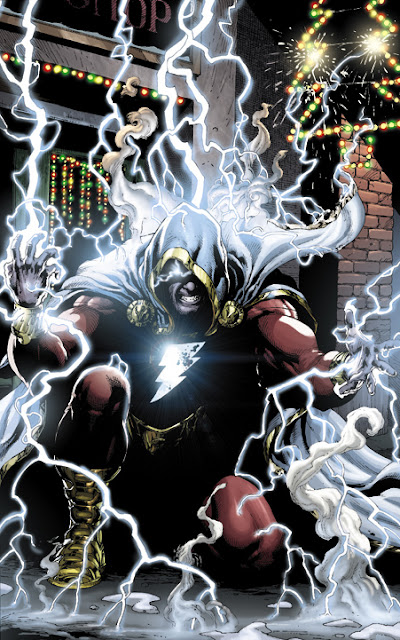 The biggest changes seem to be the cape, which is now a less floral looking cloak, a hood a la video game Assassins Creed, and a menacing grimace even Batman would be proud of.

On the changes from DC's Source blog, Johns states "Gary and I will be focusing on the magic hero instead of the super hero...We're telling the story of the hero's young alter ego, Billy Batson, a foster kid at a crossroads in his life. The question is, how does the emotional journey of this troubled teenager collide with the fate of the world?"

What do you think?  Is this just one panel where the usually bright and dynamic hero needs to turn it on to warn evil to stray from it's current path, or is this how Cap er Shazam will act from this point forward? Me, based on all the great work Johns did on the character prior to the 52 reboot, I'm hoping it's the former, but only the pages of this month's Justice League #7 knows for sure.
Posted by IADW at 2:00 pm