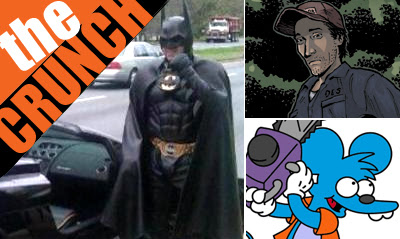 CRUNCH! A man dressed as Batman was pulled over in Silver Spring Maryland for having only a bat-emblem on his black Lamborghini where his license plate should be. Let off with a warning, 'Batman' continued on to his actual appointment - visiting sick kids at a local hospital. (Via CBS).
CRUNCH! Are you one of those folks who judge an episode of The Simpsons on whether or not it contains an episode of Itchy and Scratchy? Well rejoice, YouTube user MrBestDeni has compiled all the blood, all the pain, into one mammoth 48-minute long video of terror;
CRUNCH! Digital-comics flag-waiver and blind super-hero writer extraordinare, Mark Waid has released a free online web comic of his own; Luther. Drawn by Jeremy Rock, the freebie is a teaser for the medium's potential and Waid's upcoming web-comic line, a line we'll be hearing more on this April. Read Luther free, right after the jump. 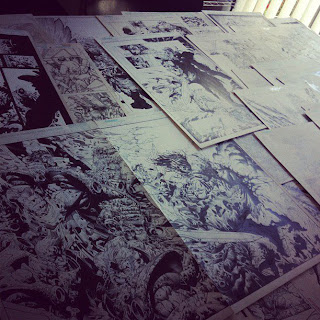 CRUNCH! One of the few folks in the world to say 'Moon Knight catapulted my career' artist Stephen Platt is making waves on Facebook, with instagram photos of his raw pencilled artwork. It's a sweet look at a man whose detailed lines have recently resurfaced at Marvel, and you can see the whole gallery right after the jump.
Posted by IADW at 12:00 am