As if yesterday's post didn't tell you, IDW are hitting 2012 hard with a whole new range of wallet tempters, looking in your general direction. KISS and Mars Attacks! both kick off in June, bringing all the usual suspects from IDW's star-studded line back with them. Of all the covers in the IDW June 2012 solicitations, these five take top honours; 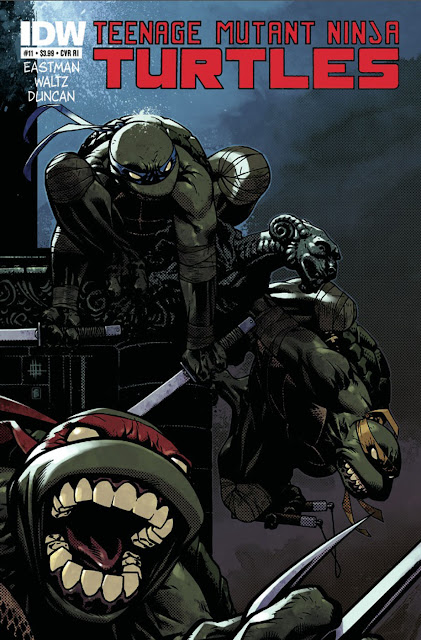 For characters that have been on every kind of merchandise you can think of (and even some you can't) finding a decent fresh take on the TMNT can be pretty tricky. Not so here!

IDW say: The Turtles bring in a surprising new ally to storm the Foot Clan lair! Meanwhile, will Splinter escape the Foot? He'll have to get through the Shredder first! It's a rematch centuries in the making, don't miss it! W: Tom Waltz, Kevin Eastman A: Dan Duncan. 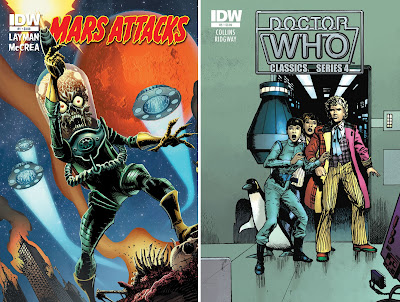 Mars Attacks! #1 - With 55 covers, each sporting one of the original trading cards and the art of Wally Wood, Bob Powell and Norman Saunders, it's like a collectible card series in comic book form!
Doctor Who Classics Series IV #5 - I'm a fan of the early Dr's. Heck I even remember the theme tune giving me chills as a kid. This cover by John Ridgway nails the suspense and craziness of that era here. 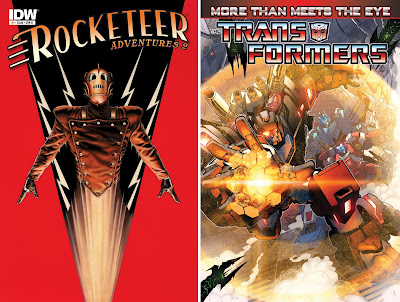 Rocketeer Adventures 2 #4 - The final issue of this mini series goes out with a blast under this Darwyn Cooke cover!
Transformers More Than Meets The Eye Vol1 Alex Milne was born to draw robots - just look at this guy! What I wouldn't give to see posters of the G1 stars done in his style!

What do you think?  Sound off below. For more from other publishers in June 2012 click here, or to find out the rest of IDW's June line-up, follow the jump!
Posted by IADW at 2:00 pm