June at the House of Ideas is the month of long overdue returns. There's Black Cat in The Defenders (once again illustrated by Terry Dodson), Omega Red in Uncanny X-Force and The Lizard takes a chomp out of more than the Big Apple in Amazing Spider-Man. Of all the revivals and AvsX-ing going down in Marvel's June 2012 solicitations, these five covers look the sharpest; 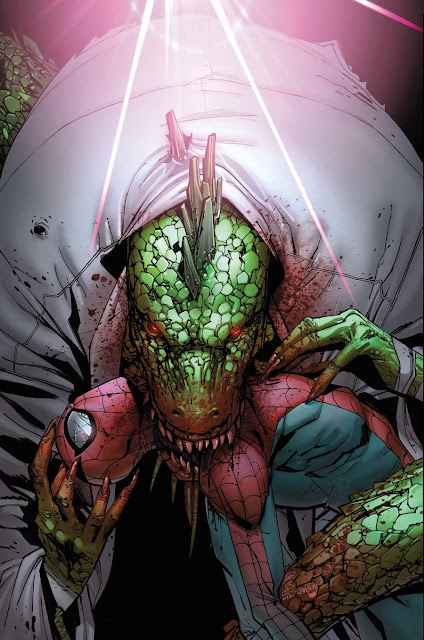 Okay so when I said The Lizard 'takes a chomp out of more than the Big Apple' I meant Pete. But just look at that cover - how can you walk past that? Simply put, you can't.
Marvel say: No need to wait for the movie to see Spider-Man wrangle the reptilian rage of one of his greatest foes! Spider-Man is stuck between two monsters when Morbius the Living Vampire attempts to cure the Lizard and restore Curt Connors. W: Dan Slott A: Giuseppe Camuncoli. 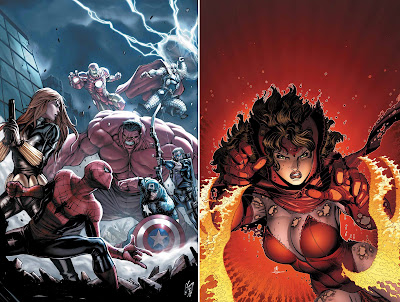 Amazing Spider-Man #687 - Stefano Caselli Doc Ock now has a new Sinister Six - The Avengers? Relax Spidey, Widow's still on your side, and that means everything should be okay. Should be.
Avengers vs X-Men #6 (of 12) - Nick Bradshaw God bless you Scarlet Witch! The best Avenger ever and her former hubby are back in Earth's Mightiest, and Nick goes a long way into proving why she ranks as one of them with this 'vs The Phoenix' cover. 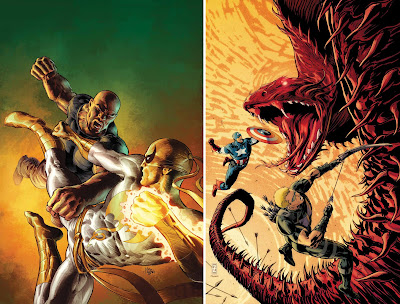 New Avengers #27 - Mike Deodato - Has Iron Fist's journey with Hope really brought him to blows with his oldest and best mate? Sure seems like it!
Captain America And Hawkeye #632 - Patrick Zircher Hey, sure there's already one reptilian cover in the Top 5, but when it's a giant mega-angry red one on a wicked angle, you just don't mind do you?
What do you think?  Sound off below. For more from other publishers in June 2012 click here, or to find out the rest of Marvel's June line-up, follow the jump!
Posted by IADW at 12:44 pm