Dan's Playing Avengers Alliance On Facebook, Are You? Avengers Break YouTube Records, And More, When It Comes To THE CRUNCH 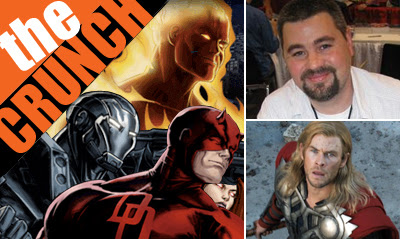 One of the original features on IADW, The Crunch is back, rounding up all the other big hits revealed over the last few days...

CRUNCH! Marvel Avengers Alliance is now live on Facebook and soaking up all my "free time"! Heroes revealed in the free to play game include Cage, Spider-Woman, Nightcrawler and She-Hulk! Click here to play, and search Dan Woodward if you need me as an ally!

CRUNCH! Writer Jonathan Hickman will sadly leave The Fantastic Four this October, after an incredible three year run growing the franchise. Who will step into the giant shoes he leaves behind after Fantastic Four #611 and FF #23? Neil Gaiman or Jason Aaron perhaps?

CRUNCH! Dov Torbin is launching Comic Strip Tees, a new-comic-a-day website, where readers can buy t-shirts based on the art of the various independent cartoonists involved! Plus, the artists get some of the profit! Find out more on the gig over at Dov's Kickstarter page.

CRUNCH! The latest Avengers movie trailer broke YouTube records with 13.7 million views in it's first 24 hours! This makes the presumably Midguard Serpent introducing spot the most viewed trailer on iTunes and the iTunes Trailers app for iPhone, iPad and iPod touch!
Posted by IADW at 9:30 pm