FANTASTIC FOUREVER! The Top Four Tattoos Of The Human Torch And The Thing 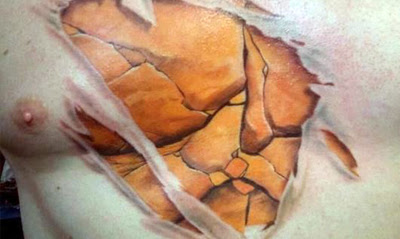 Originally this wee post was going to be titled The Top Four Fantastic Four Tattoos, however despite oogles of googles, no one seems to sport Mr Fantastic or his less pliable wife Sue Storm. Actually scratch that, thousands of people just like me have amazing tattoo's of the Invisible Woman, they just don't know it yet!

Thing and The Human Torch on the otherhand - now you're talking. Added to the one at the top of this post, below are my picks for the top four tatts starring the high-flying Torch and the ever-lovin' blue-eyed Thing. Even if pain's not your game, they could have you eyeing up that blank shoulder of yours in a whole new way; 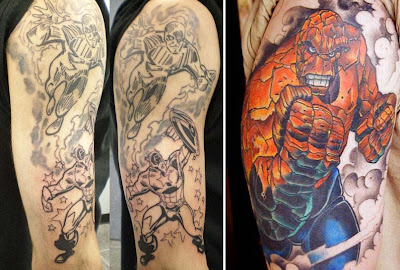 4) Captain America and The Human Torch (Via) Sure that could be Cap's Invaders teammate the Human Torch and not the Four's hot-headed version, but hey, a Torch is a Torch right?

3) The Thing (Via) If any artist deserves a skin art following, it's the all-ages styles of the late and much missed Mike Wieringo. Here his take on The Thing is just as strong on flesh as it was the printed page! 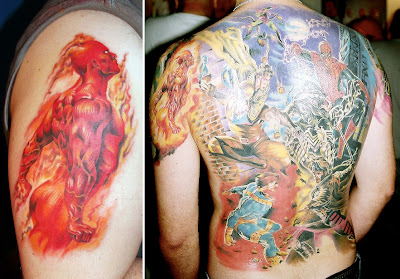 2) Boris's Torch Same Boris Vallejo painting inspired image, two different executions. One shows how Boris's art can easily stand on its own (via), the other how said painting can reverse the 'cool factor' of a tattoo that also includes Jubilee (via)! 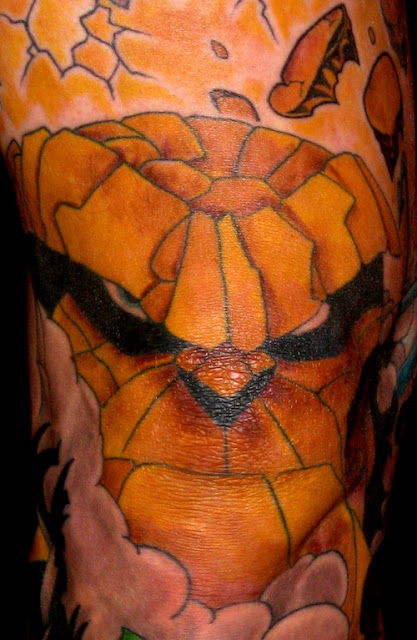 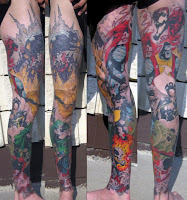 1) Marvel Jam (Via) As if the lone Thing face above wasn't sweet enough, it's actually part of an entire Marvel leg tattoo, taken from original art by Kevin Harden and the awesome Skottie Young!