The only thing the Batmobile has had in common with professional race cars up until this point is the fact I've never driven any of them. However, I think the design team at Nissan have let their anticipation for this year's upcoming blockbuster The Dark Knight Rises flow over, as they release visuals of their new fully-functional Deltawing. 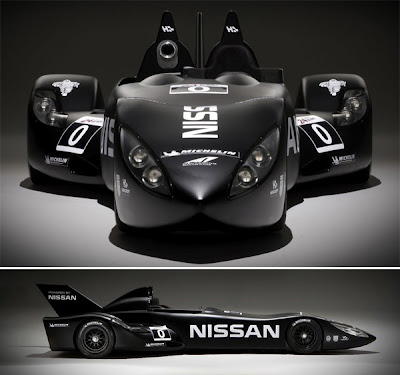 Dubbed the future of IndyCar racing, Nissan hopes the Deltawing brings a 'new' standard to race design. With twin seats like the old Adam West Batmobile, married with a sleek long nose and aerodynamic fins like the pimped-out bat-rides of the Tim Burton and Joel Schumacher era, the Deltawing not only proves Bat-fans are everywhere, it moves just like Burton's infamous jet-powered beastie too. Just watch;

Okay so it's still not me in the driving seat and the cornering is a little iffy in spots, but both those faults could be pretty easily fixed. Wanna' go for a spin?
Posted by IADW at 3:42 am