If you thought Ivan Reis was a pencilling powerhouse on Green Lantern or The Rann-Thanagar War, you need to be reading Aquaman. While the launch issues were great reads that got the creative team safely from base to base, for me, writer Geoff Johns smacked issue #5 out of the park so well, his team is now sending Batman out to find the ball. 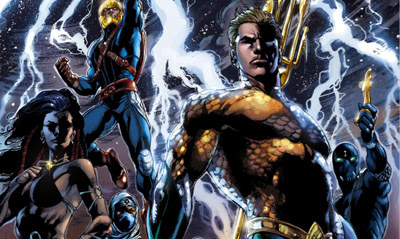 Heading towards the revelation of how Atlantis actually sank, this week character sketches surfaced of 'The Others'. Not only is the team a super-powered league from the depths of Aquaman's past, with Brazil, Russia and Tehran among the homelands of it's members, they are more global in recruitment then the 'World's Greatest Heroes' Aquaman currently hangs around with in Justice League.
'Returning' in #7 of their former teammate's top selling title (out March 28), the first chapter of their self-titled story-arc will see the return of a 'deadly' villian (Ocean Master?) and the truth behind Arthur becoming Aquaman. From DC's Source Blog, the revealed character sketches by the aqua-art team of Ivan Reis and Joe Prado are as follows; 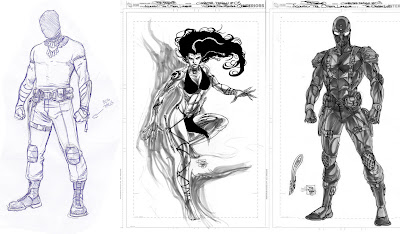 Prisoner-Of-War Held captive for years and the only survivor of his squad, the faceless victim that is Prisoner-Of-War, still fights for his freedom and identity, albeit armed with shackles of power.
Ya'wara While her sketch names her 'Jahne The Jungle Queen' DC are staying tight-lipped on this Brazilian beauties past, except for the fact she has a jaguar sidekick and as Johns teases on The Source "a connection with Aquaman that isn't going to make Mera very happy".
The Operative Connected to all the good governments and agencies, and possibly even some that aren't, The Operative unlike the others, has never gone into hiding. Why? Johns states simply to The Source "The Operative never stops until the mission is won. And in his line of work the mission is never won". 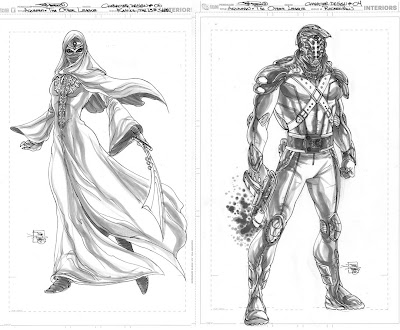 Kahina the Seer Originally from Tehran, the Seer is named after her prophetic vision, which she is as adept at using as she is her sword.
Vostok X The tenth (and only successful) Russian attempt to create the perfect cosmonaut conceived in space, Vostok-X may be emotionally isolated, but his genetically altered endurance, strength and intelligence levels more than make up for it on the battlefield.
Posted by IADW at 12:00 am