When Gorilla Comics launched as an imprint at Image, it had all the possibilities of repeating the success the first band of comic celebs had uniting to form the parent brand. Creator-owned titles and owners included Empire by Mark Waid and Barry Kitson, and Tellos by Todd Dezago and Mike Wieringo - but alas it wasn't to be. Now one of the Gorrilla line has thrown it's hat back into the ring as a free online webcomic, Karl Kessel and Tom Grummett's Section Zero. 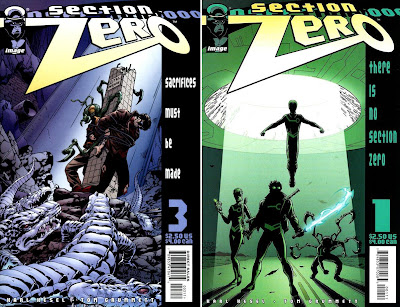 Those with a keen memory will remember the title featured in my Top 20 Image Titles post, celebrating Image Comics' 20th birthday, so I'm ecstatic to see the U.N's covert challengers of the unknown return - still by the original creative (and highly unsung) team of writer Karl Kesel and artist Tom Grummett!

New to Section Zero? No worries, the webcomic has started by breaking down the original three printed issues into byte sized chunks, re-lettered (and in some places reworded) - live right now on Kesel's website madgeniuscomics.com (he's already up to issue #2)! 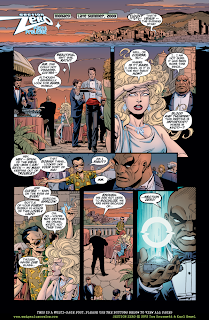 After it's caught up, Section Zero will jump 12 years from it's past to our present, so now is a great time to get on board! Where else can you find trolls, lost civilisations, alien beings, and all the strange creatures from beyond time and space that made the original so enjoyable and promising in one place?
So if you're after an electric team to share your down time with, Section Zero offers you a two-for-one. Tom and Karl back working together; and the likes of Thom Talesi, a teenager that transforms into an insect-like being for a twenty-four hours working alongside Sargasso, a reptilian Section Zero agent from the 60's and 70's! What are you waiting for? Just click the jump!
Posted by IADW at 1:01 pm